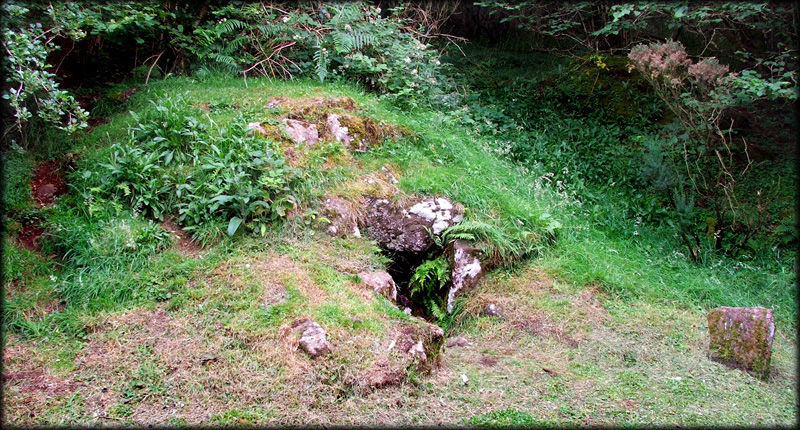 Sweat houses were chambers heated to produce profuse sweating to treat ailments such as rheumatic pains and for the invigorating effect created. These were used by many peoples in many places.

Mr Elbert Sundt (1869) states that the custom of using sweat houses came from the eastern states of the Scandinavian Penninsula and spread through Norway, Sweden, Denmark and Germany. It was introduced into Iceland at the migration period A.D. 872-930. In Finland, large communal sweat houses still supply the bathing needs of the villagers.

The sweat houses in Londonderry are primitive structures, similar to clochans of Ireland and Scotland. They are shaped like a bee skep with the back of un-cemented rough stones built into rising ground and the entrance at a lower ground level. Access was through a narrow opening  so small that entry had to be by creeping on hands and knees and smoke escaped through a hole in the  roof

The first Ordinance Survey notes from the early 19th Century held in the  library at the Royal Academy Dublin it is a practice when  any of the inhabitants who are  troubled with pain or rheumatism of any kind to come to the vault and place in it a large fire for some hours until properly heated .  The fire is then removed and the patient goes in naked. The door is closed like an oven and he remains until the whole body is covered with perspiration, then  wrapped in clothing and taken home.  A variation of this was to heat the house then remove the fire and sprinkle the stones  with water to create steam similar to Russian baths. In some places when the fire was removed rushes were scattered on the floor where the bather could recline until covered in sweat, then often they cooled down by plunging in a stream nearby the house.

Five known sweat houses in County Londonderry where discovered at:

Tirkane: In the Parish of Killyelagh  half a mile west of Killelagh Lough in the townland  of Tirkane. The chamber is 7 feet long. 2feet nine inches broad and five feet six inches high with a sixteen inch entrance and a cobbled floor. It is difficult to find as it has become overgrown with grass and shrubs, leaving only the entrance visible.

Ballydonegan: A sweat house discovered in the village of Ballydonegan in the parish of Banagher was in a good state of preservation. It sits 220 yards south of the stepping stones at the west of the village. The entrance is 1foot 9 inches at ground level. The height inside is 6 feet and the roof is composed of 4 flags with a hole to let smoke out. The length of the chamber is 8 feet by 3 feet 6inches broad with a fireplace at the back.

Dunbeg: This house is built next a stream –the Curly Burn in the Parish of Drumachose about 400yads east of Lady O’Chacon’s Bridge. It is roughly built in a bee skep shape. Four feet four inches high, four feet six inches long by four feet broad. Two square stones and a flag form the lintel  at the ground level entrance.

Meavemanoughter :A quarter of a mile east of the village of Ringsend in the Parish of Aghadowey close to the north side of the road leading to Aghadowey there is a roundish shaped sweat house built against an artificial bank with a rock forming the back wall. The house measures four feet, six inches high, seven feet long and three feet ten inches wide. Long flat stones form the roof with a smoke hall at the back. No streams are close to hand.

Cashel :  About one mile north north west of Cashel  Bridge off the Leterloan Road in the Parish of Macosquin lies a small unroofed sweat house.   The narrow entrance is two feet wide blocked off behind a low stone wall. The chamber itself is four feet long, by two feet eight inches wide. A large flat sided rock forms the back wall. No water is nearby.