Other Excavations – A decorated bone case from Dreenan Bog 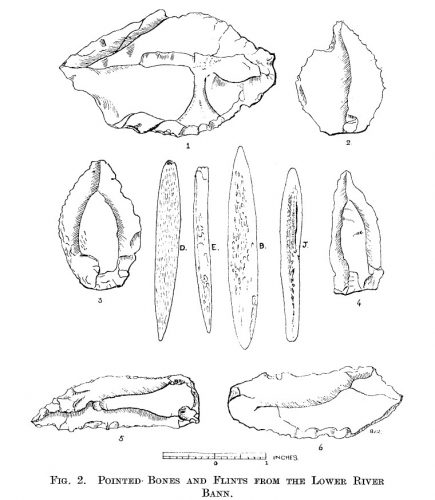 Some Pointed Bones, Flints and Stone Discs from the Lower Bann

The paper describes findings from the River Bann during 1930’s dredging operations. These are 12 Bone points, discoidal flakes, flints and an axe head.

The use of the bone for domestic tools, weapons and personal adornment is discussed initially before focus is on the particular findings in the Bann.

As an assessor Andrew McL May received finds and rewards made to those who handed them in, i.e. dredgers. He specifically made sure that these significant numbers of pointed bones found just above the Cutts were not thrown away. These finds were added to by further finds upriver at Camus Ford and the east channel of Loughan Island. He also had personal similar finds from Portstewart  Sandhills, Portglenone Ford and Kilrea.

The Bones vary from 3 inches – 8 inches long from longitudinally split leg bones. They have been sharpened at one end with a rougher point at the other end.

The finding of clusters in the locations above the Cutts argues against their use as fish spears. Their use in the formation of a trap with hazel rods is possible.

Each Bone point is described in detail and drawn to scale actual size specifying its site of origin.

The Discoidal Flakes were mainly clustered at the Loughan Island (east). Again these are drawn actual size, described, and the site of find stated.

Flints found beside the Bone points are described as is the axe head.

Remembering this paper is before carbon dating, he felt they may well be Mesolithic and most likely used in conjunction with a wooden frame as a fish trap.

A programme of carbon dating by Sinead McCartan of N.M.N.I in Cultra has shown that eight of these Bone points from the Cutts area belong to between 9,000 -7,000 years ago i.e. Mesolithic .Given the rarity of large mammals in Ireland it is possible that human and bear were used. The area in which they were found raises the question that they were used to catch eels serving as eel forks or eel rakes.