Other Excavations – Two Cairns at Gortacloghan 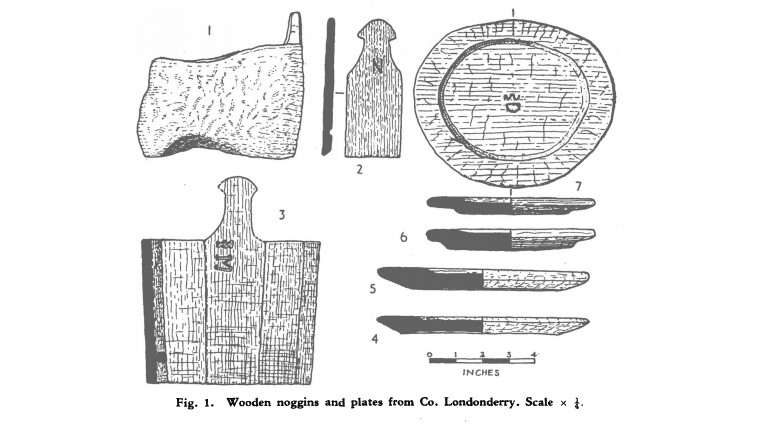 Wooden objects are from time to time found during bog cutting operations but unfortunately many are not recorded.

All finds whether wood or other materials should be reported to the nearest R.U.C.barrack or the Secretary of the Ancient Monuments Advisory Council so that a record of the site and circumstances of find can be recorded.

The objects described are mainly finds brought to Andrew May by a chance remark or other when travelling round the county.

One of these referred to is a discovery in April 1946 when Messrs. Lowry and Halliday were cutting “flou” turf in a large bog which occupies parts of the town lands of Tyance and Moyagoney. One of the workers uncovered several wooden vessels at a depth of 2 ½ feet in a track he was making for a drain. The site is about 400 yards on the Moyagoney side of the boundary line which separates that town land from Tyance, about 150 yards from a little “island” in a part of the bog known locally as soft marsh. On this island can be seen what may be the foundations of a stone house. Close to the finds lay a “beet of lint” which workers believed was put there to mark the spot of the hidden vessels.

This article goes on to describe “noggins and plates” in great detail. Usually an initial letter of the owner can be seen on these items.

Wooden Plates –Of the four plates found only one was of oak and was distorted lying in the bog. He describes the plates in great detail.

Wooden Churn and butter dish was found in Summer 1944 when Mr R.Clark was working to a depth of 4 feet in the Dreenan Bog County Londonderry. They are both made of oak. The churn stands 11 inches high and is slightly oval in section, the measurements being 10inches by 9 inches .It is ¼inch thick and excepting the bottom which is inserted groove, is cut out in one piece. The wheel turned butter dish was found beside the churn, and is beautifully described.

The churn and butter dish made from oak found at Dreenan Bog, County Londonderry

Wooden Rods: The late Mr H.Henry, Drumagarner, gave Andrew May an extraordinary pair of wooden rods found in a bog at Moneysallin, Kilrea. Both¾ are made from willow and are 3 feet long with average thickness of 1¾inches but thicker and flatter at the ends. No satisfactory theories have yet been advanced to their use and these have been numerous and varied.

Scutching Knives: Mr G.Barnett, Owenreagh obtained a pair of scutching knives of a form not seen or recorded before .They were obtained inTullybrick but were not in use in the life time of any one now there. The over length of the knife and handle is 20 inches. The handle is rounded for 4 ½inches of its length then expands into a heart shaped point 2¾ inches in length. A socket has been cut through this expansion to take the blade which is held rigid by three wooden pegs. At the handle end of the blade it is 3 inches broad but expands to 7¼ inches at the other. Average thickness is ¹/8 inch.

Andrew May accurately records and describes without attributing a date, an age and usage.