Andrew McL May and those who knew him

Andrew McL May and those who knew him 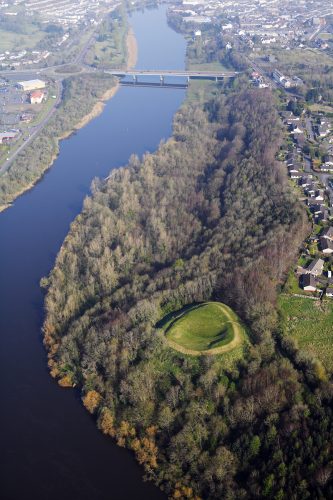 Members of the Johnston family are well known as dentists and doctors in the Coleraine, Ballymoney and Mid Ulster areas. In conversation with brothers John and Billy it was discovered that Andrew McLean May’s son Laurence was married to their Aunt Isobel. Billy kindly recorded some of his memories of the May family and shared photographs found in their home. 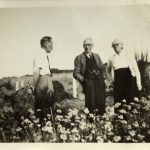 Laurence May with his father and mother in law 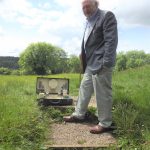 Mr Patterson knew Andrew May in person and shared his passion for collecting, not just archaeological treasures but a variety of items of historical importance.

When asked about Andrew May he described him as “… a dapper gentleman always out and about in the countryside, but who kept his personal life very private. He was a keen sportsman and told of one time he took on a bet with his sports friends to see who could put their heel up to their neck. He won the bet, as no one else found it possible.“

May originally came from Scotland to work for the Ministry of Agriculture in Dublin (1921) but later he came North to take up the post of Beekeeping and Horticultural advisor for County Londonderry. His work took him around the countryside visiting farms and giving talks to local groups. He was an active member of the Route Naturalist and Field Club and was appointed President on the 14th January 1938. 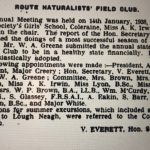 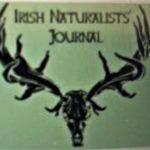 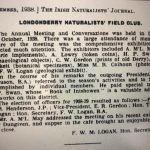 In the 30’s farms were small with 23% of the land being used for crops. Tillage was completed using horses and involved much labour. Families were relatively self sufficient and diets were based on local produce, milk, eggs, potatoes, cabbage, bacon. It is thought May was responsible for encouraging the growing of additional crops and introducing additional fruits and vegetables in NI.

With the advent of World War II food was seen as a weapon of war and the Minister of Agriculture, at the time Sir Basil Brooke, asked farmers and all householders of Ulster to sow an additional 250,000 acres of crops in 1940 alone.

With the introduction of rationing in 1941 May was most likely tasked with implementing a programme of growing more food similar to the dig for victory campaign in Britain during the war years. This involved recommending varieties of vegetables and fruit that would have higher yields and also making most use of the ground available. For example interspersing cabbages with potatoes to maximise use of space and productivity. Orange carrots were also introduced in the Magiligan area, previously early carrots had been purple.

Allotments were introduced and young men and women enrolled on training programmes on how to care for the land. 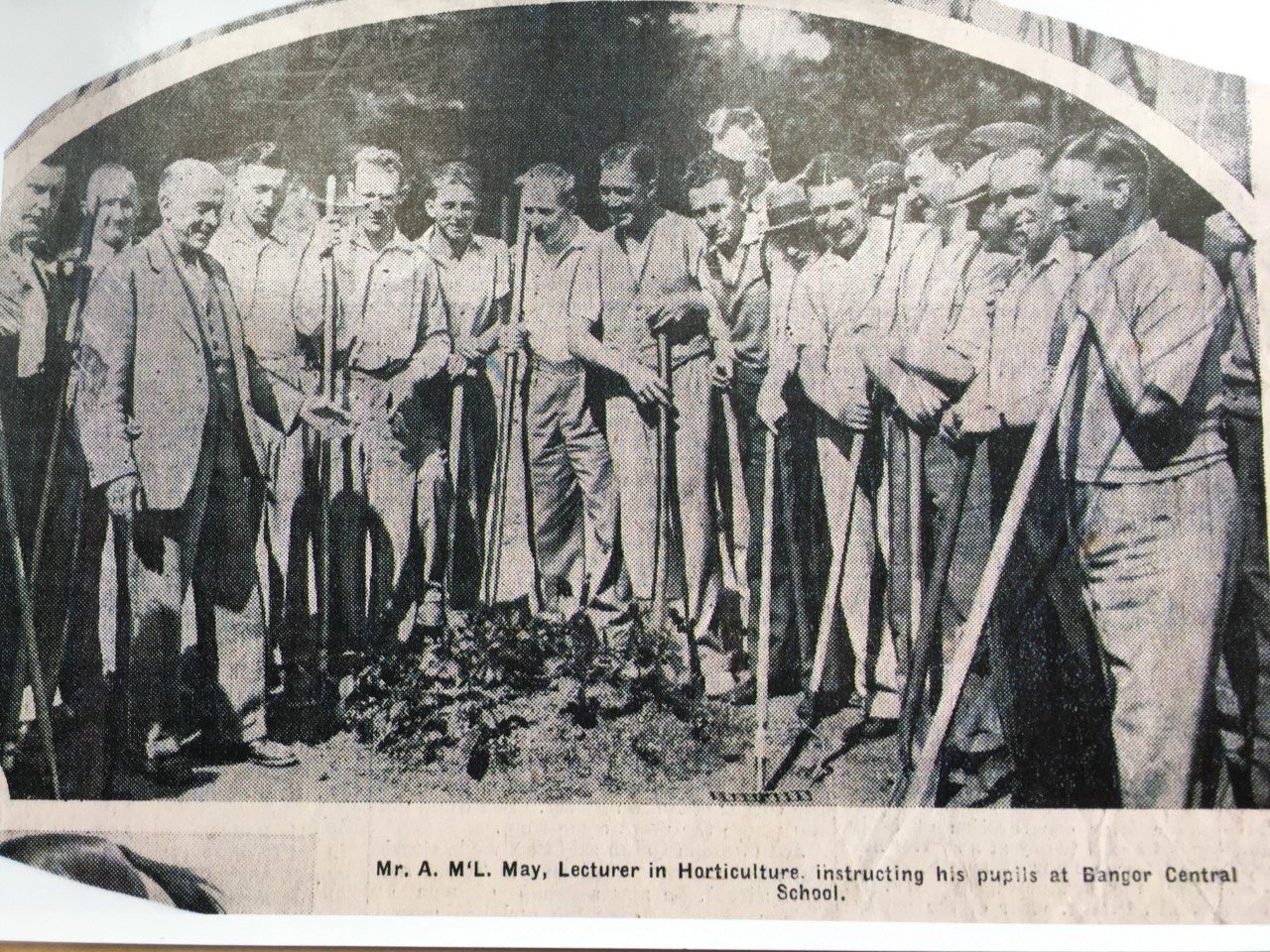 Food shortages were never as bad in Northern Ireland as in parts of Europe or the UK and originally only bacon, ham, sugar and butter were rationed, this continued until 1954 with meat being the final food to taken out of rationing (see https://www.bbc.co.uk/bitesize/guides/zgrkmsg/revision/6).

In his day to day work May became very familiar with the countryside around Coleraine, but his main topic of conversation was mostly about archaeology. His knowledge and ability to recognise the importance of what was unearthed  was widely recognised and he was often called upon to examine something found by workmen carrying out building repairs or drainage work.

One farmer who asked for advice on pruning a fruit tree, before he showed his latest find from the fields, complained that he saw his tree ‘massacred and naked in five minutes flat’

Living locally he was greatly interested in the finds along the Lower Bann and how these reflected the ancient cultures of the Bann Valley and its people from Neolithic times through the Bronze and Norman periods. In the 1930’s  when the Bann was being dredged he followed the boat and picked up the dredging material that had been discarded by the boatmen. From this he identified many flints, bone needles and other bones, thought to be from wild boar.  A significant find was made on the north side of the railway bridge across the Bann close to where the cheese factory is today.  Many of these artefacts are stored at the Ulster Museum Belfast.

May was appointed  to the Ancient Monuments Advisory Council at its inception in 1937. This led to his work for the government on ancient monuments of Co Londonderry that was later published as a section in 1940 in the Preliminary Survey of Ancient Monuments in Northern Ireland.

‘Well known archaeologists came to see him to seek his permission to dig on the Mount (Mountsandel) to seek his advice. An act of courtesy rather than necessity.’

Another reported observation of May’s was that the elevation of the Mount was a reminder of its importance and our history.  I wonder what he would say today seeing it obscured by trees and surrounded by housing!

Letter from Andrew McL May to George Barnett 1961

George Barnett was well known in Co Tyrone for his interest in local history and for writing poetry. He was a contemporary of Andrew May and brought the find of the Standing Stones at Beaghmore to his attention. He wrote a weekly column ‘Nature and Antiquarian Notes’ in the Northern Whig Newspaper in the 1920s under the pen name of G.B. M’Keown.

In his poetry and the letter from May to Barnett it is clear they had much in common and had shared many experiences.

‘There’s a man called ‘May’ who comes down from Coleraine, If he’s hunting for treasure I fear it’s in vein,

He digs with a spade, and much time he does spend,

To look for a trace of the Bold ‘Beaker Men!’

*Beaker Men were people who came to Britain from Europe in the Early Bronze Age. 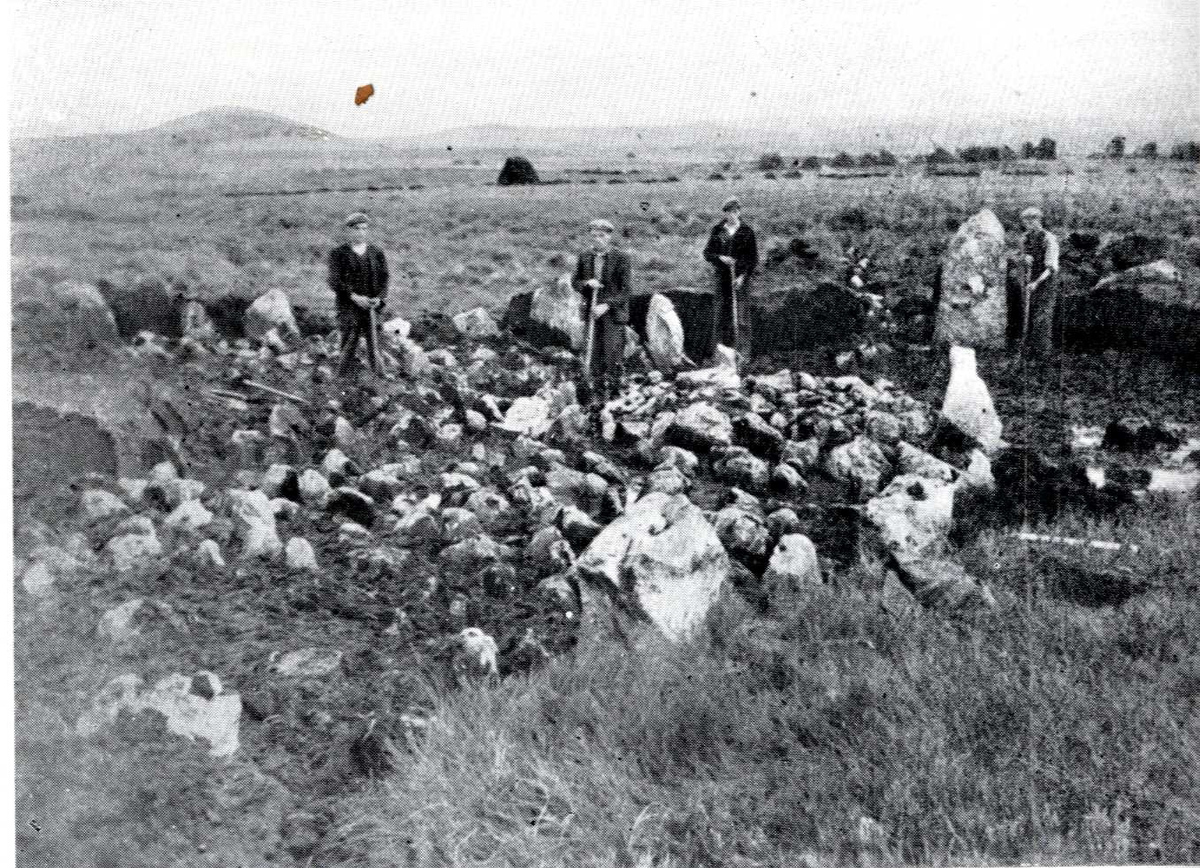 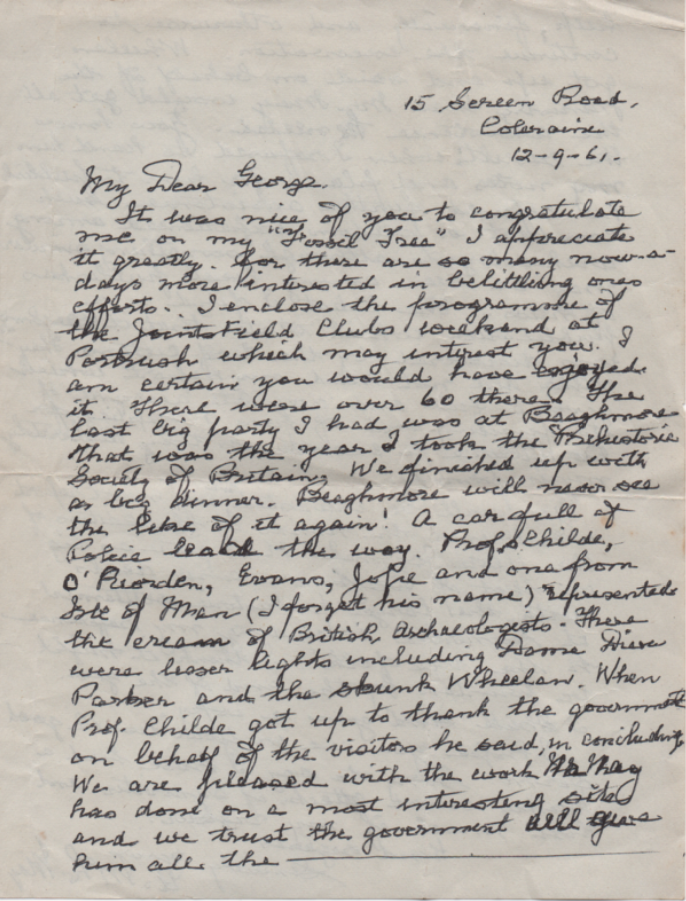 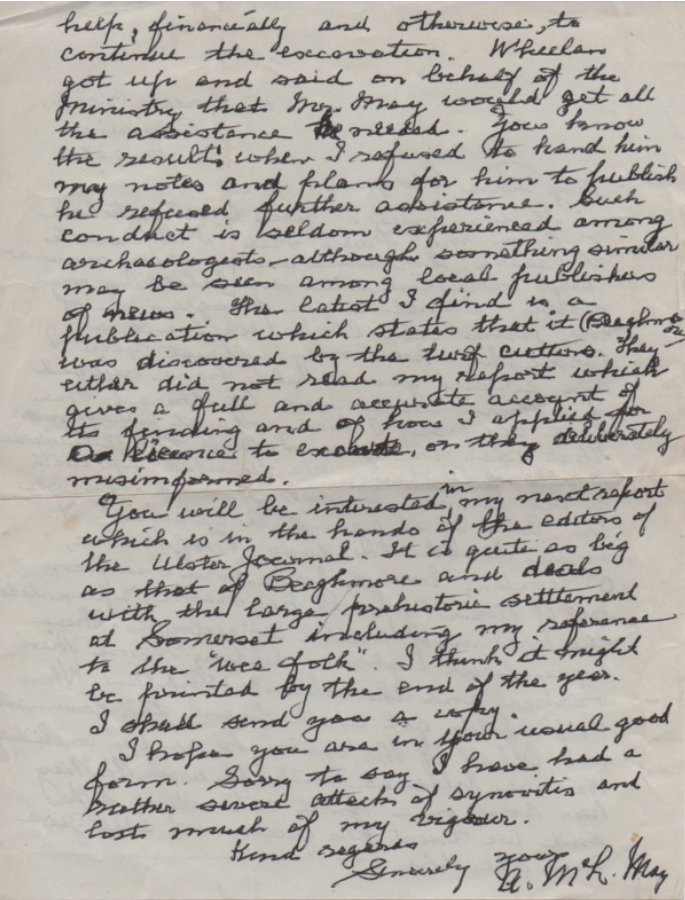 It was nice of you to congratulate me on my ‘Fossil Tree’. I appreciate it greatly, for there are so many nowadays more interested in belittling ones efforts. I enclose the programme of the Jacinto (?) Field Clubs weekend at Portrush which may interest you. I am certain you would have enjoyed it. There were over 60 there. The last big party I had was at Beaghmore that was the year I took the Prehistoric Society of Britain. We finished up with a big dinner. Beaghmore will never see the like again!  A car full of police lead the way. Profs Childe, O’Riordain, Evans, Jofie and one from the Isle of Man (I forget his name) represented the cream of British Archaeologists. There were lesser lights including Dorrse?  Diere?  Parker and the skunk Wheelan. When Prof Childe got up to thank the government on behalf of the visitors, he said in concluding  we are pleased with the work A McL May has done on this most interesting site and we trust the Government will give all the help, financially and otherwise, to continue the excavation.

Wheelan got up and said on behalf of the Ministry that Mr May would get all the assistance he needed. You know the results when I refused to hand him my notes and plans to publish he refused further assistance. Such conduct is seldom experienced among archaeologists – although something similar may  be seen among local publishers of news. The latest I find is a publication which states that it (Beaghmore) was discovered by turf cutters. They either did not read  my report which gives a full and accurate account of its finding and of how I applied for the licence to excavate or they {are} deliberately misinformed.

You will be interested in my next report which is in the hands of the editors of the Ulster Journal. It is quite as big as that of Beaghmore and deals with the large prehistoric settlement at Somerset. Including my reference to the ‘wee folk’ I think it might be printed by the end of the year. I shall send you a copy.

I hope you are in your usual good form. Sorry to say I have had a severe attack of synovitis  and lost much of my vigour.

Sincerely yours A. McL May