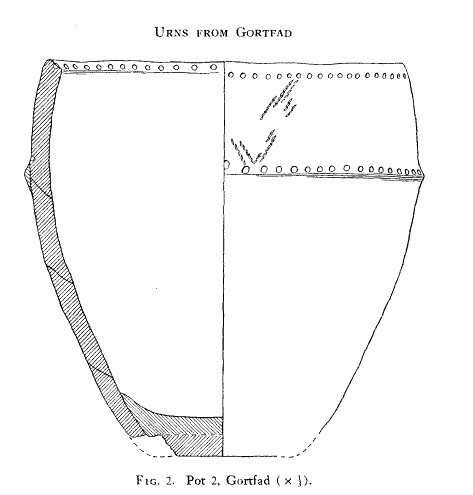 Cremation Burials at Gortfad, Co. Londonderry, with Some Remarks on Cordoned Urns

The discovery at Gortfad was made on 5th December 1955. This townland lies one mile south west of Garvagh town. The site sits in an area of drumlins 360 feet on the flat top of one of these drumlins.

This was an area of considerable importance in earlier times as it was one of the major passes through the Sperrin Mountains and links the Bann and Roe River valleys.

There is evidence of other prehistoric remains in the area, – cairns, standing stones, a large burial cist and a similar burial site at Slatavarty.

The site was uncovered by workmen digging a sewer. Two cinerary urns were discovered, one broken during the dig. The broken urn was in an inverted position and contained bones. The pieces of the urn were taken from the trench and the cremated bones removed to Garvagh Police Station.

The remains of the 2nd urn stood in its original position base down 3feet under the ground surface. This too had its rim broken but the urn was mostly protected by a ring of stones. It also contained bones along with charcoal fragments from alder and possibly willow as identified by Dr A G Smith from Queens University Belfast . Thirteen feet from the urns was a large wedge shaped recumbent burial stone probably connected with the burials.

Pot 1 was a good example of the cordoned type of urn with impressed twisted cord decoration. The material is hard clay full of angular grits up to 6mm, possibly of basalt. The urn is a pinkish colour outside and this extends at the top of the rim inside. The remainder of the inside is black.

Pot 2 – a bucket urn with a single cordon. It was decorated with irregular circular stab impressions and very faint cord impressions, above the single cordon. The clay is poorly fired with evidence of a ring construction to reinforce the base.

These type of urns had initially been dated as late Bronze Age using the model developed by Abercromby 1912. However  there was much academic, critic, debate and challenge by May and others at this time as to the reliability of this method of dating.

Examination of Pot 1 suggests that the bones represents at least one individual, possibly an old adult male. Also a second smaller individual of no definitive age or sex was identified.

Pot 2 possibly contained the bones of a female, but these bones were broken into very small pieces at the time of cremation and shortly afterwards , but not as a result of the activities of the dig.