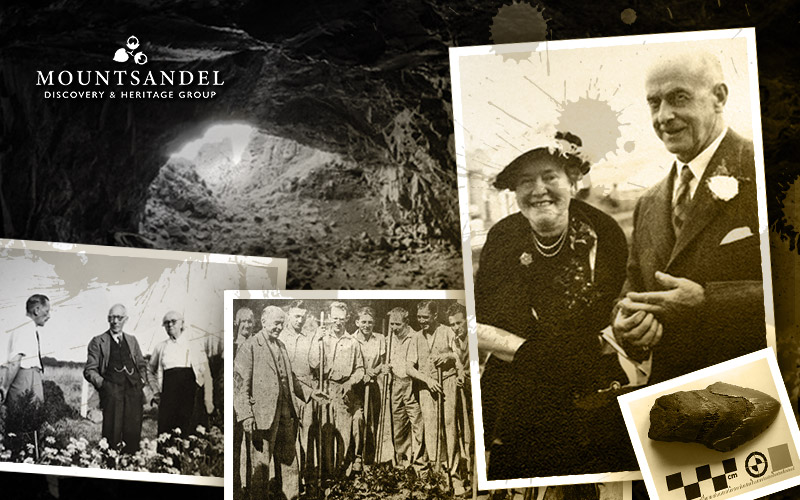 Mountsandel: A Fine Spot for Fishing

“In the 1950’s Alexander McL May an amateur archaeologist, found what we now call earlier Mesolithic artefacts eroding down slope on the river side of Mountsandel Fort” (subsequently this location was excavated by Pat Collins). “Therefore in 1972 I went out of curiosity to look around the fields in the area; to our surprise, in a ploughed field close to the fort we found an area of charcoal stained soil, with on its surface numerous flint tools and other debris”

This led to the definitive 4 years of excavations at the Mountsandel Upper from 1973  and the discovery of Ireland’s earliest settlement carbon dated to almost 10,000 years ago.

“ Claude Blake Whelan, attended to the Dept. of Works ,and A. Mc L May monitored the dredging of the Lower Bann above the Cutts in the 1930s Pointed bone implements were discovered here of which 130 were rescued .These are rare elsewhere. It is possible that human or bear bones were used. Perhaps these served as eel forks or rakes. These were later carbon dated to between 7,000- 9,000 years ago.”

“Recovered artefacts from later periods show the continued importance of the area these include the Bann Disc. Again, thanks to the eagle eye of the May family, silver bound handle of a Viking Sword was recovered from the 1930, dredging”  ( of the Bann). Page 29