Other Excavations – A wooden javelin from Altinure 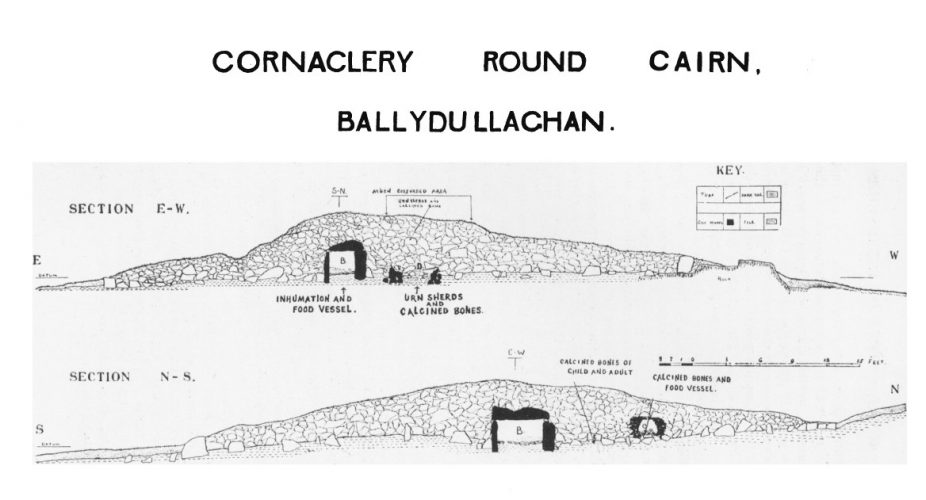 Cornacleary Round Cairn, Town land of Ballydullaghan, County of Londonderry

Setting the scene in which this cairn and many prehistoric finds lies is described with great feeling for the countryside. Its theme is hilly country between the Bann and the Roe is worth reading.

The Cairn is in Ballydullaghan town land about 3 miles from Garvagh on a little ridge at 700 feet. The excavation was grant aided and 12 people were involved in the  work .The expectations were low as stones had been already used for a wall and also Antrim boys had once raided it.

The stones were pitted basalt, it was over 6 feet high and 57 feet north/south, 54 feet east/west. There remained a part of a ring of stones forming a revetment around the structure with small reinforcing stones carefully set within the circle.

Cist A in the North east segment was examined first. The walls were of 4 stones on their edges neatly fitted and covered by a schist capstone. Sherds of a food vessel were the only finding and formed half of the food vessel.

Broken fragments of pottery is part of a ritual of megalithic burial in Northern Ireland. The absence of human remains here might be in memory of a spirit in the family who failed to return home. The vessel is described and the analysis of Dr Gordon Childe is given as Abercromby type 2A.

This contained the primary internment and had been untouched by treasure seekers. Larger than Cist A covered by a massive capstone it was 4 feet by 3 feet by 3 feet internally.

The flexed skeleton of a tall male 25-30 years of age on black soil paved with small stones. Laid on its right side, head facing the sun and moon at their zeniths.

A food vessel lay beside the skull. Similar in size and shape to the one earlier described it was classified as more British Yorkshire Type A.

May speculated that it might be significant that this particular vessel was the one accompanying the inhumation. Cremation was the custom prior to the early Bronze Age and at this time inhumation was introduced. It only had a passing influence. He suggests that he may have been from Beaker Folk and comments on the finds at Wellglass Limavady, Loughash and Cashelbane.The Beaker folk had broad head structure and came from south Scotland, originally from East Rhine at the end of the  Neolithic.

This was smaller and contained a small leaf flint, a food vessel and cremated bones.

This had been interfered with. The stones here showed evidence of firing. Charcoal, calcined bones and a few sherds of pot were found. Also there was a small quartz pebble 12 mms in diameter.

North of Cist B lay cremated bones with no covering and the ground was baked as if bones were deposited while hot. They may belong to the same person as cremated at Cist D.

3 Flints and a hammer stone found at this site are also described.

After the conclusion and acknowledgements is the full report of Professor T Walmsley on the human remains found at Cornaclery, Cists