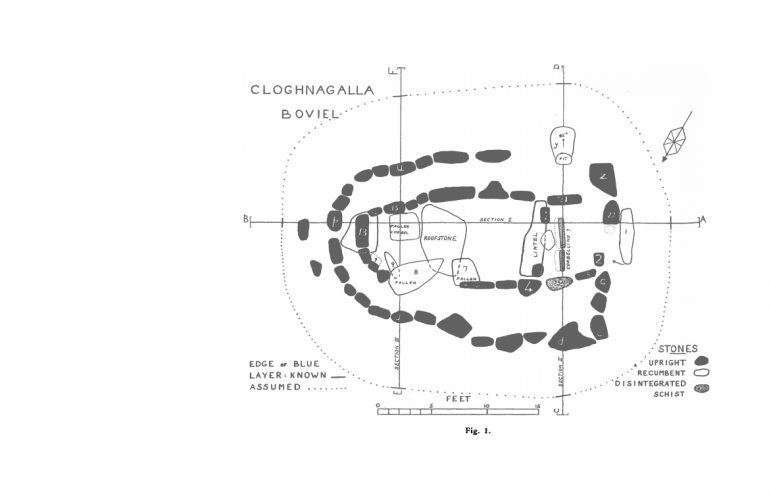 The excavation was funded by Belfast Museum and labour subsidy from Ministry of Finance. It was done in August –September 1938.On conclusion a number of stones were re-erected.

Cloghnagalla (“the stone of the hag”) is in Boviel Town land, 2¼miles on the Glenshane Road from Dungiven.The cairn is 660 yards from the main road up the bank of Benbradagh.

The ordinance survey map plot is given.

The Cairn excavated consisted of an ante chamber 5feet 9 inches by 6 feet 6 inches and a larger gallery chamber and built from megaliths. The original entrance stone was 5 feet long and was fallen.

The site appeared from outside as a low oblong mound with stones very visible, a large capstone. The rear of the megalith was open so the end –stone was visible to the depth of 18 inches with a flat slab on top. As this site map shows, the plan is that of a U, inside a U.

The neighbourhood and adjacent Town lands have revealed round cairns and are rich in folklore and prehistoric finds.

The floor of the Cairn was a Blue a layer of metamorphic rock from glacial drift.

The contents found included human remains in the form of calcined bones. An expert felt them to be incinerated fractions of bones from various body parts and teeth from one person.

Charcoal found was hazel and some willow .52 flints are described and a Schist Axe Head.

Many fragments of pottery was found .At least four pots are represented and, with exception of one bronze –age sherd are Neolithic in character.

In the conclusion he discusses the other northern gallery graves and findings on them. North West Derry was open to people from the north and east, to curragh- owners of the Bann and Foyle and to the cairn culture in Tyrone.

A polished axe head from Boviel forms part  of the May Collection in the Ulster Museum.