NI100 Reflections on the Causeway Coast and Glens 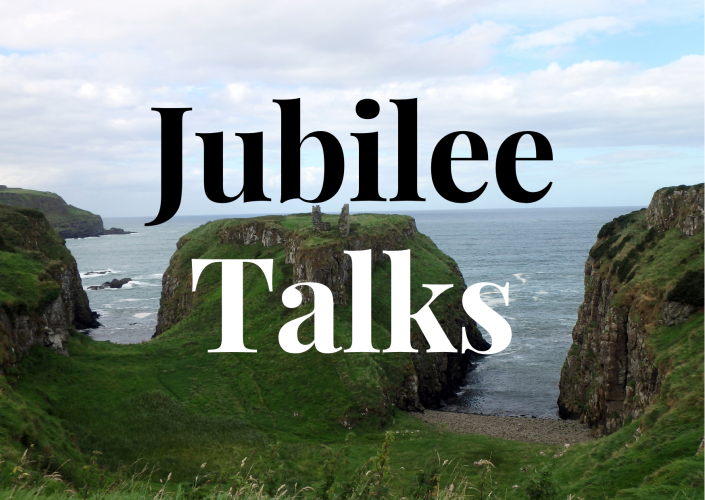 Inspired by the Queen’s Platinum Jubilee year, Museum Services are delivering a programme of online Jubilee Talks in January and February 2022. Presented by specialist speakers and covering a variety of loosely connected royal topics, the talks are sure to appeal to a wide range of audiences.

To book your place on what is sure to be a fascinating talk series, contact Museum Services at cms@causewaycoastandglens.gov.uk.

This programme has received financial support from The Executive Office as part of the District Councils Good Relations Programme and supports the T:BUC strategy (Together Building a United Community).

Cormac McSparron – The Kingdom of Dalriada

Dal Riada is a name which resonates through our history, often referenced in popular discourse, a pivotal place in the relationships of these islands. This lecture will briefly examine connections across the North Channel from earliest times, before looking in greater depth at the history of this Irish-Scottish Medieval Kingdom and its legacy.

Dr Cormac McSparron is a Research Fellow with the Centre for Archaeological Fieldwork, Queen’s University Belfast. He has a wide range of research interests, including the inter-relationship of prehistoric and early historic Ireland and Scotland, the emergence of complex societies, archaeological theory and the archaeology of migration.

As a family home, home to the Governors of and Secretaries of State for Northern Ireland and Royal residence, Hillsborough Castle has long had a close relationship with the monarchy. Having for many years been ‘off limits’ to visitors for security reasons, the mission of Historic Royal Palaces is to make Hillsborough Castle accessible to all, and for the stories associated with it to be more widely known and better understood. This talk will explore the various elements of the site’s relationship to the monarchy and the ways in which it has developed alongside changes in the politics of Ireland, north and south, in the twentieth and twenty-first centuries.

Alan Greer holds degrees in law, and Irish history and politics, and has worked for Historic Royal Palaces for the last four years. His work benefits from a very genuine love of the place as well as interest in the wider historical and political context within which Hillsborough Castle sits.

This talk will explore the legacy of 500 years of European imperialism with its issues around colonialism, slavery and racism. It will pay tribute to Queen Elizabeth II in respect to her approach to colonial history in these post-colonial times and suggest that her example could serve as a guide to those revisiting and challenging of the dominant narratives of the colonial era.

With a background in Education in Contemporary Society, Seamus Farrell has over 25 years’ experience working in overseas development and peace education. He has been a consultant and trainer with the Junction for 20 years where the approach developed to explore the Decade of Centenaries is now being turned to explore the legacy of Imperialism.

Can there really still be a place for monarchy in democratic societies? The talk will compare European and other monarchies, and consider whether monarchy can survive as a constitutional form.

This second lecture by Dr Cormac McSparron will look at some of the most important, later-prehistoric and early Medieval sites in north Ulster, starting with Aileach outside Derry/Londonderry, perhaps the pre-eminent royal site in the northern half of Ireland in the Early Medieval period, and progressing via the Giant’s Sconce and Dunmull, to the capital of the Dal Riada at Dunseverick on the north Antrim coast. The lecture will ask when and by whom these great capitals were built, what function they performed and how they came to be abandoned, as political fortunes ebbed and flowed.

The long and rich Irish ancestry of the Queen is well-known to genealogists but not known to the public. I will explain how the Queen has a vast number of Irish ancestors, including multiple Irish rebels, how Brian Boru is the ancestor of every English monarch since Henry IV, and how the Queen’s most recent Irish-born ancestor was alive in 1842. Does this matter? I think yes. These are examples of facts that are well-known to historians and genealogists but that popular culture rejects, preferring to believe a myth about the past instead.

Dr Mark Humphrys is a lecturer at Dublin City University, but is also known for his 38 years of genealogy work at humphrysfamilytree.com. Descended himself from a family of famous Irish rebels and nationalist politicians, and married to an English direct descendant of the Earl of Pembroke through a famous 18th century affair, he has often written of the crossovers between Irish and British genealogies.

To book your place, or to get involved with this or future projects, contact Museum Services at cms@causewaycoastandglens.gov.uk