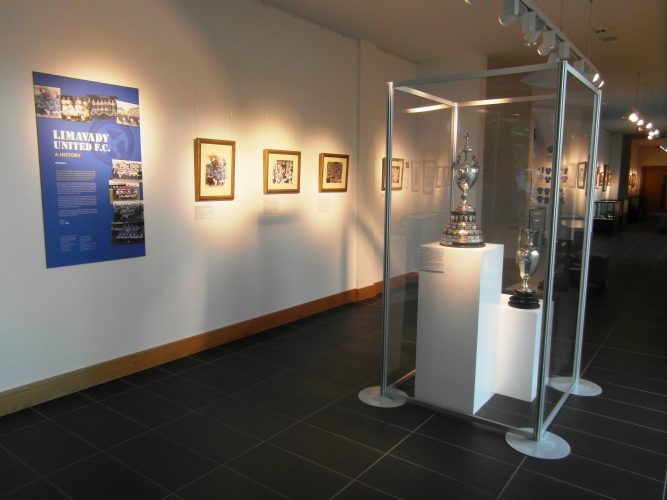 Limavady United has a long and distinguished history stretching back over 125 years, and in the early years of the game the club was a leading light in the local game. In fact no fewer than seven players from the club represented Ireland in the 1880’s. With the passage of time, the club has lost track of most of these men, and as part of the ongoing research into their careers the club is now making an appeal to the Limavady public in the hope that photographs, caps, or even details of their lasting places might be located, so that a proper tribute can be made to them. Of the seven, only Joe Sherrard’s details and grave can now be located. Details of the other six, as known by the club, are given below.

Anyone who can help with any biographical details is asked to please contact the club via its website, or David Brewster on 028777 68700.

Jim “Bummer” Allen was recognised for his strong play and heading ability. He combined his football with cricket and when Limavady Wanderers Cricket Club members formed a football club in 1882 it was Allen who became the club’s representative at the Irish F.A.. In 1883 he joined local rivals Alexander and continued to play for Limavady following the formation by the amalgamation of Alexander and Wanderers in 1884.

Brown was the son of a local Presbyterian minister, and he went on to become a solicitor in Portadown. An athlete from the start of his academic career at Coleraine Inst., he won many competitions throughout Ulster. He was the mainstay of the early association, running it almost single handedly for the first four years. His career included captaining County Derry for three years, and playing for Ulster and Leinster, as well as organising and captaining a “North of Ireland” eleven (drawn from the County Derry F.A. teams with two guests from Distillery) that toured to the Glasgow Exhibition on the 27th October 1888, losing 4-1 to Scottish side Battlefield. The team also included Bob Gault, Mat Douglas, Jim Allen, and one of the Sherrards, as well as former “Lim” George Forbes, who was now at Distillery. Brown played two seasons for County Dublin, and captained an Ireland team that played Celtic and Hibernian at about this time.

Born in Canada in 1869, George Forbes settled in Londonderry and began his football career with Limavady. A strong, reliable full-back (either left or right), he tasted North-West Cup success and played the Irish Cup semi-final, and also won the first of three caps, while with the club. Transferred to Distillery in the spring of 1889, he made his debut on the 22nd April – after the Irish Cup and Co. Antrim Shield had already been won. In 1891-92 he was the club captain. The profile in the “Ulster Football and Cycling News” issue of 19th February 1892 also claims that he played for St. Columb’s Court but makes no mention of his spell with Limavady. He regained his place in the Ireland side during the 1891 British Championship campaign, slotting in at right-back and left-back against England and Scotland respectively. He held a runners’ up medal in the Belfast Charity Cup defeat to Linfield in May1892. Transferred to Glentoran in November that year, Forbes helped his new club to the Co. Down Cup final.

Originally a cricketer with the Alexander Cricket Club, Tom McLean took to football with some success. He played in the two Irish Cup Final defeats by Distillery and played for Ireland against Scotland in March 1885 in the same forward-line as Limavady team mate, Joe Sherrard. Having spent the first-half on the back-foot the Irish found themselves 4-0 down at the break. In the second-half however the Irish rallied and made two dents in the Hampden net, though the Scots still finished 8-2 winners.