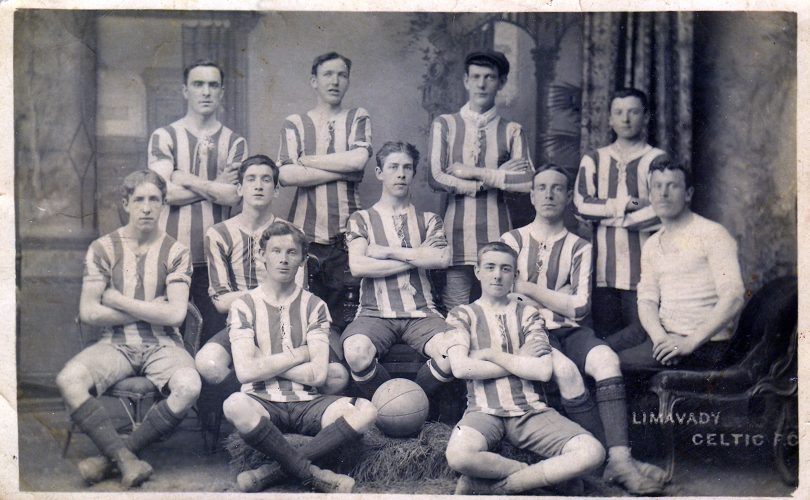 The Limavady United F.C.exhibition was on display at the Roe Valley Arts and Cultural Centre/Ionad Ealaíon agus Cultúir Ghleann na Ró in Limavady from 7 July to 25 August 2012.

One of the founding members of the Irish Football Association, provider of seven Irish internationals, and famously conquerer of mighty Everton on their home ground, Limavady was a pioneering football club in Ireland during the latter half of the 19th century.

When local cricket club Alexander decided to embrace the new sport in 1880 as a winter training method, little did the members know that they were sowing the seeds of a club that was to make a mark on the sport far beyond the small County Londonderry town. After an initially spectacular decade of success, the club declined to the point of near oblivion, before the long slow ascent to Premiership status in 2003.

In three centuries the name of Limavady has been known and respected in local sporting circles, appearing in two Irish Cup finals and numerous intermediate and junior finals. Along the way there have been tales of courage and skill, triumph and tradgedy, and not a little violence and skullduggery, but the team has always instilled a fierce pride in the town and community from which so many players have been drawn.

The exhibition featured photographs, medals, shirts, programmes and trophies lent my former players and supporters of the club. It also featured the Original Irish Cup dating from 1880, which was on loan from the Irish Football Association.

The exhibition was produced in partnership with Limavady United F.C. Special thanks go to David Brewster, the club’s Vice Chairman, for providing objects, photographs and information about the history of the club.

To read about Limavady’s Irish Internationals and the current appeal by Limavady United F.C. for further information, click here.