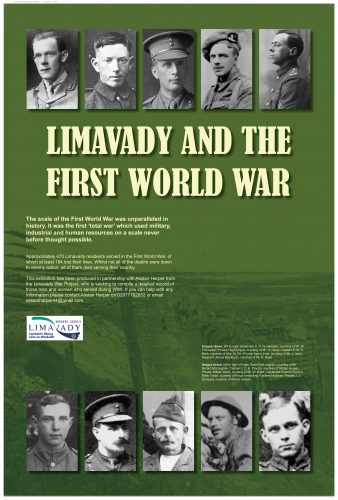 Limavady and World War One Exhibition

The Limavady and the First World War exhibition was on display at the Roe Valley Arts and Cultural Centre/Ionad Ealaíon agus Cultúir Ghleann na Ró in Limavady from 8 September to 27 October 2012.

The scale of the First World War was unparalleled in history. It was the first ‘total war’ which used military, industrial and human resources on a scale never before thought possible.

Approximately 470  Limavady residents served in the First World War, of which at least 184 lost their lives. Whilst not all of the deaths were down to enemy action, all of them died serving their country.

At the beginning of the war, Britain only possessed a professional army and did not have a policy of national service in place as was standard in countries such as France and Germany. A call to arms was therefore raised and thousands of men in Ireland, both Protestant and Catholic, decided to sign up. When war broke out in August 1914, many said that it would be ‘over by Christmas’. By the end of the year, however, it became apparent that would not be the case. In reality, the war was to last a further four years.

Life in the Trenches

Life in the trenches during the First World War took many forms, and varied widely from sector to sector and from front to front. Typically, a battalion would be expected to serve a spell in the front line.  This would be followed by a stint spent in support, and then in reserve lines.  A period of rest would follow – generally short in duration – before the whole cycle of trench duty would start afresh. In reality the cycle was determined by the necessities of the situation.  Even while at rest men might find themselves tasked with duties that placed them in the line of fire. Others would spend far longer in the front line than usual, usually in the more ‘busy’ sectors.

The writing and receiving of letters and parcels was a vital part of sustaining morale and overcoming boredom, which was a feature of trench life. Many were dedicated correspondents –one infrantryman, for example, wrote home: ‘in exactly twelve months I have received 167 letters besides paper and parcels and have written 242 letters.’ Many soldiers had relatives and friends fighting in other units. From December 1914, the Post Office ran a postal service that carried mail between units.

The basic British infantryman, like his French and German contemporaries, was issued with a rifle with a bayonet. These were the principal weapons used by soldiers during the war. In addition to rifles and bayonets, other weapons such as machine guns, grenades and poison gas were also used. Shrapnel shells also featured heavily in the First World War. Soldiers subjected to continual exposure to shell-fire were in danger of developing shell-shock. Early symptoms included tiredness, irritability, giddiness, lack of concentration and headaches. Eventually the men suffered mental breakdowns making it impossible for them to remain in the front-line.

The battles of the First World War produced a vast number of casualties and deaths – and similarly vast numbers of missing soldiers. Many soldiers were wounded by gunshots and shrapnel during battle, whilst countless others became sick due to the unsanitary conditions in the trenches. Those who were injured or too sick to fight were honourably discharged. In order to honour the great number who lost their lives during the war, memorials were erected in villages and towns across Europe.

A range of campaign medals and honours were awarded to those who served in the First World War. Medals were impressed with the name of the recipient and usually included some or all of the following: service number, rank, first name or initial, surname and military unit (Regiment or Corps). This was either on the rim of the medal or in the case of a star, on the reverse.

Many different types of battle remains have been found on the old battlefields of 1914-1918 – shell fragments, shrapnel and metal fragments are just some of the items that have been discovered. Even today, any current task which involves turning over earth, such as ploughing, road building or foundation building frequently still turns up a shell or grenade.

This exhibition was produced in partnership with Alistair Harper from the Limavady War Project, who is seeking to compile a detailed record of those men and women who served during WWI. If you can help with any information please contact Alistair Harper on 02877762652 or email alistairharper44@gmail.com.