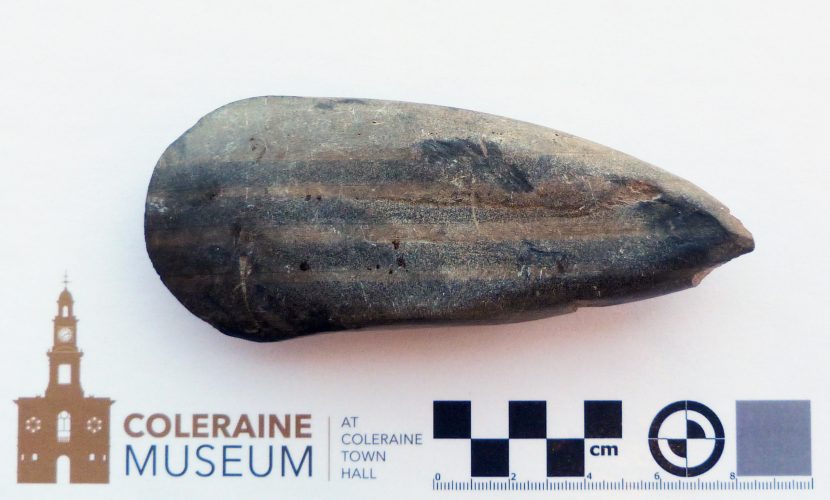 The owners of this object had just moved into their house which had been built in an old field covered with a lot of stones, rocks and all sorts of debris. They organised for a man they knew as the ‘Stone Picker’ to come and clear the field in order to create a proper garden. The Stone Picker was working at it all day in an area that used to be given over to potatoes. In the afternoon, he came to their door and suggested “Youse might like to keep this…” presenting the owners with this stone axe head. They were delighted that he had realised the significance of the stone and handed it over; it has been a treasured family object ever since.

This object is a complete polished stone axe head. Visible wear on the stone, approximately halfway to two thirds down its length, indicating where the axe head was fastened onto a wooden handle or haft.

This stone was formed from alternating light and dark sedimentary layers which suggests that it may be mudstone. Polished axe heads made of mudstone were produced along the River Bann during the late Mesolithic (c.5500-3800 BC), but with the exception of a site at Newferry, there is little unambiguous evidence that they were extensively used. Polished stone axe heads are most commonly associated with the Neolithic (c.3800-2000 BC), although in the later period the preferred stone was porcellanite.

More sophisticated stone axe technologies allowed people to be more effective at felling trees and working wood. These skills would have been increasingly necessary with the introduction of agriculture in the Neolithic period as farmers needed to clear the woodlands to create fields and pastures.