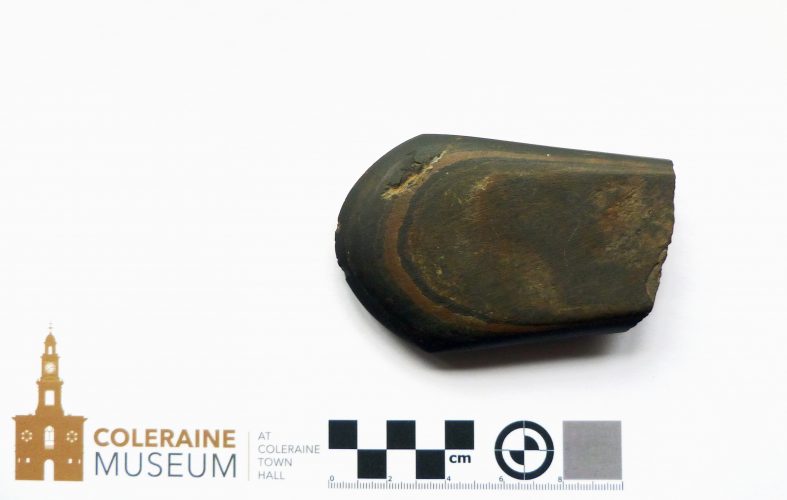 The owner of this axe head was fishing as a child with his father below the Cutts on the river Bann. He recalls the moment he first saw the axe:

“It was an unusually low tide that day and the bay was thick with dark sticky mud. Here and there patches of smooth grey pebbles emerged like eggs from the mud. We set up to fish close to an ancient willow that stretched horizontally out into the water and while I was fixing the bait ready to cast, one of the rocks caught my eye. There was something unusual about this pebble, it looked unnatural. It was too symmetrical, too uniform. I squelched through the mud and peered more closely. I couldn’t believe my eyes. A smooth polished axe head lying flat on the mud as if placed there yesterday. It was an unforgettable moment to find such a beautiful object lost for thousands of years. I often wonder about the person who must have stood close to that spot before discarding it, broken; someone with the skill and perseverance to make a stone axe, and who maybe grew up on the same river bank.”

This object is a polished stone axe head. Its blade is intact but the axe has been broken along the butt. Wear on the stone, just in front of the break, may indicate where the axe head was fastened onto a wooden handle or haft.

The prominent layering visible on the axe head suggests that it has been made from a sedimentary rock, likely an indurated mudstone. Polished axe heads made of mudstone were produced along the River Bann during the late Mesolithic (c.5500-3800 BC), but with the exception of a site at Newferry, there is little unambiguous evidence that they were extensively used. Polished stone axe heads are most commonly associated with the Neolithic (c.3800-2000 BC), although in the later period the preferred stone was porcellanite.

More sophisticated stone axe technologies allowed people to be more effective at felling trees and working wood. These skills would have been increasingly necessary with the introduction of agriculture in the Neolithic period as farmers needed to clear the woodlands to create fields and pastures.