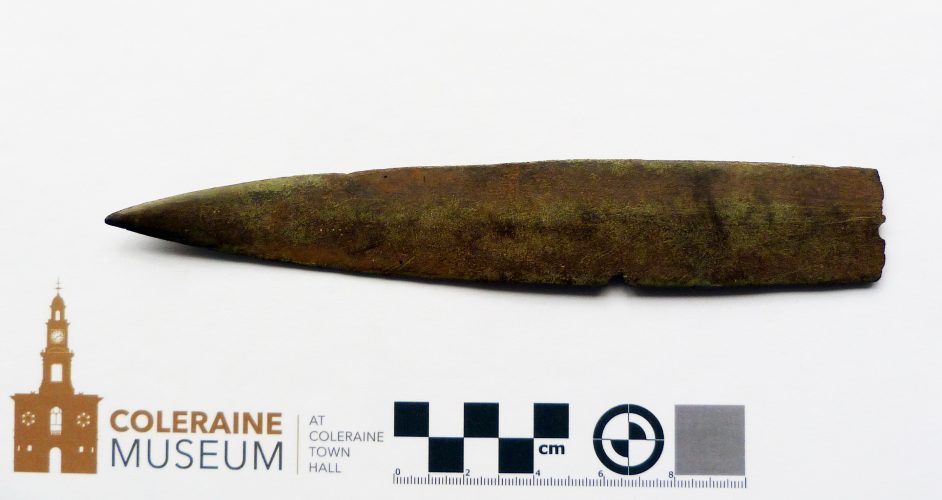 The owner of this object discovered it while digging a garden pond. The location of the pond lay near a raised road which used to flood regularly and so the land owner decided to make a virtue out of necessity and turn the waterlogged land into a pool. While digging, and still within the first spade-depth from the surface, he came across this piece of bronze and had no immediate thoughts that it may have been of any great antiquity. He was never completely sure, but the owner thought that there may have been some form of wooden or leather ‘handle’ associated with it when he pulled it from the ground, but whatever it was, it disintegrated instantly into pulp when he lifted the object.

The undecorated blade is very slightly lanceolate, or leaf-shaped, with a thicker central ridge which narrows towards the either edge, placing it in Eoghan’s Class 4, the most common group of Irish swords, belonging to the Dowris phase of the late Bronze Age, c.900-300 BC.

There is a large nick along one edge of the sword which is consistent with use marks seen on other Irish and European bronze swords. When one bronze weapon was hit against another, such damage was easily accrued and blades often (although not in this case) show evidence of repair and re-sharpening. This pattern of damage regularly occurred on the ‘front’ edge of the sword blade.

Furthermore, it has been shown that sword blades for right-handed warriors commonly bent slightly to the left, while the opposite occurred for left-handed warriors. Therefore, due to the location of the large nick and the slight bend in the blade, we can say with some confidence that this sword was wielded by a right-handed individual.

This blade was already broken on discovery, and the break itself is one of the big mysteries of this object. While there is nothing unusual about a broken sword blade – such breaks are known to have occurred in battle and perhaps in post-battle rituals – this sword had a hole drilled through the thickest part of the blade before the break occurred. The patination of the metal is consistent across the object indicating that none of the damage is modern but the purpose of the drilled hole is unclear. Holes were drilled through handles to allow wooden or bone hilt plates to be riveted to the metal, but there is no explanation why a hole would be drilled through the blade.

Around 60% of all known Irish swords have been recovered from rivers, loughs and bogs where they seem to have been deliberately left as votive offerings or hoards. This practice was well documented across Ireland and Britain during the Bronze Age and the same explanation may well have been true for this blade, retrieved as it was from a natural water-logged depression.