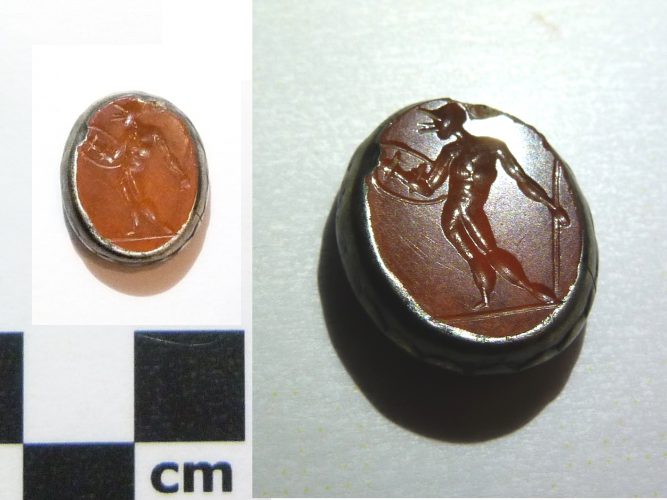 This ovular intaglio, or engraved gemstone was found in a sheep field near Killyleagh, Co. Down. The stone is rust red in colour (likely carnelian) and is encased in an undecorated metal setting around the sides and rear. The underside of the setting is unadorned, marked only by a circular damage mark at the centre where another piece of silver was once attached.. Originally, this piece was either part of a seal pendant or seal ring.

The engraved stone depicts a naked male warrior wearing an uncrested, open faced helmet, similar to those commonly seen on Roman coinage. The heroic nudity and warlike nature of his equipment indicates that the figure represents Mars, the Roman god of war. The figure curiously holds a spear in his left hand, and carries a shield strapped to his right arm. Left-handedness was, by its nature, sinister, and not how gods were normally depicted.

Engraved stones like this one were used as seals across the Greco-Roman world by merchants, notables, magistrates, and rulers as a way of verifying official letters and records – much like putting a signature on a document today. The stone would have been pushed into wet clay or wax to leave a mirror image in relief. Importantly, this mirror image would have shown the god wielding his spear in his right hand.

The fact that this intaglio is set in silver rather than gold, suggests that it belonged to a Roman of middling status, perhaps a merchant or a military officer, rather than a magistrate or great noble. But how did it get here?

We know that the Romans never conquered Ireland, but they certainly had contact with the island. In AD 82, the Roman governor of Britain, Agricola, played host to an exiled Irish ruler and toyed with the idea of using military force to put him back on his throne (Tacitus Agricola 24). In more physical terms, it has been suggested that the promontory fort of Drumanagh, north of Dublin, was either a Roman trading post, or a heavily Romanised local settlement.

Finds of Roman coins and jewellery are also known from several places including Tara, Co. Meath, and Clough, Co. Tyrone. A large hoard of Roman coins and silver was discovered at Ballinrees, Co. Londonderry in the 19thcentury. Some of these finds may be linked to trade, while others are more likely to have been the result of raids by Irish warbands across the Irish Sea from the 1st to the 5th centuries AD.

Adding to the confusion, the Neo-classical revival of the 18th and 19th centuries saw curios and exotica brought back to Ireland by Irishmen in Imperial Service, and by gentlemen on the Grand Tour.

The Killyleagh intaglio may be evidence that an ancient Roman walked on the western shores of Strangford lough; it may be evidence for an Irish raid on Roman Britain; or it may have been brought to Ireland in the modern era as a souvenir of foreign travels. The unfortunate fact is that we may never know for sure.