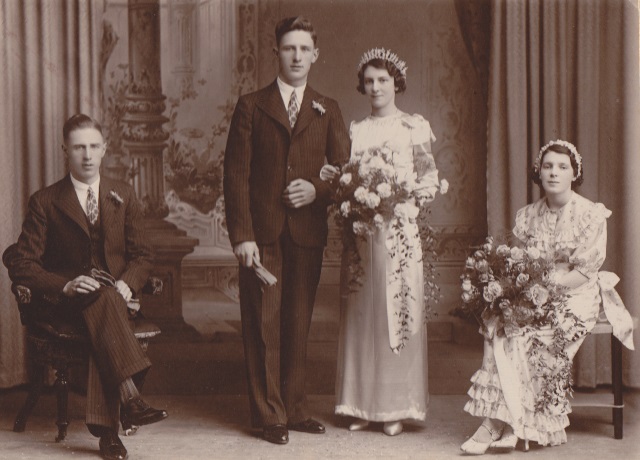 The tradition of a woman wearing a special dress on her wedding day is centuries old. Chosen by the bride to wear on one of the most important days of her life, it is a garment of great investment, both financially and emotionally. Throughout the course of the last century, wedding dress fashions have developed and evolved. From the early 1900s when long dresses with tight collars were en vogue, to the present day’s trend of strapless and figure-hugging gowns, the style of wedding dresses is ever-changing. All of the dresses on display in this exhibition were worn by real women. Some of the dresses show signs of wear – a stain on the cuff, a fray on the hem; whilst others are accompanied by memories shared by their owners. Not only are they pieces of fashion history, they are also pieces of history from the women themselves who bought, made and wore them.

1900s Dresses in the Edwardian period were long (covering the shoes of the bride) and elegant. Tight collars were popular and key fabrics included satin and lace.

1910s Styles were simpler than the Edwardian period. Raised waistlines became a popular option. Hemlines rose slightly so that the shoes of the bride were sometimes visible.

1920s Many women chose to cut their hair into a shorter style in the 1920s and wore longer veils to compensate with elaborate embellishments. Most dresses resembled a chemise style and were long, white and simple.

1930s Hats were often worn instead of veils in the 1930s. Brides tended to choose a style that they could wear again on other occasions, with many opting for a two piece suit rather than a dress.

1940s Wedding dresses in the 1940s tended to be simple and conservative. Dresses typically buttoned up the full length of the back. Long sleeves, modest bust lines and long skirts were other common design elements.

1950s Celebrity culture heavily influenced wedding gowns of the 1950s. Jacqueline Bouvier, Grace Kelly and Elizabeth Taylor in the 1950 film Father of the Bride inspired many fashion trends including the use of lace, beading and high necklines.

1960s Fitted waists on wedding dresses were popular in the early 1960s. As the decade progressed, the empire line came in to fashion, which raised the waistline to below the bust.  A-line dresses, which had no defined waistline to speak of, were also popular.

1970s Dresses in the 1970s came in many different styles. Some took inspiration from the Victorian era, with raised waists and ruffled sleeves. Camelot sleeves which resembled clothing from the Early Middle Ages were also a popular choice.

1980s Princess Diana was the famous bride of the 1980s and her dress inspired many bridal trends of the era. Sleeves tended to be voluminous and exaggerated and dresses were embellished with pearls, bows and embroidered elements.

1990s Long wide skirts were a popular option in the 1990s. Towards the end of the decade, dress designs moved from big and bold to simple and elegant. Free flowing dresses and narrow silhouettes replaced earlier wide skirt dresses.

2000s Modern dresses have become increasingly personalised, in both their pattern and style. Strapless and single-shoulder dresses which show off the shoulders are popular, so too are figure-hugging designs.

To view some of the photographs which were featured in the exhibition, click here.