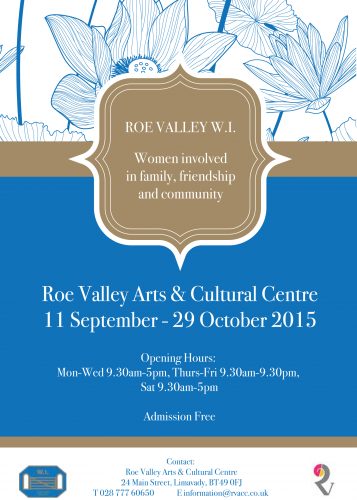 The beginning of the Women’s Institute

On the 19th February 1897 the first Women’s Institute in the world was formed in the province of Ontario, Canada. Celebrating its Centenary, the first W.I. meeting in the United Kingdom took place on 16th September 1915 at Llanfair PG in North Wales. It had two clear aims: to revitalise rural communities and to encourage women to become more involved in producing food during the First World War. The W.I. was then later established in Northern Ireland in 1932 as The Federation of Women’s Institutes when Miss Dorothea Macausland opened the first institute in Garvagh.
While the outbreak of the Second World War slowed the formation of new institutes, those already in existence had a ready-made structure to help with the war effort, so much so that the Ministry of Food put its scheme for the Preservation of Fruit into the hands of the Women’s Institute. The WI helped the war effort in many ways such as collecting waste paper, bottle tops, knitting and mending or the troops. Since then the organisation aims have broadened and it is now the largest women’s voluntary organisation in the UK.

To ensure that individual institutes would form part of a single body The Federation of Women’s Institutes was formed in Northern Ireland on 24 April 1932. In 1978 a headquarters was purchased, known as Federation house. Prior to 1955 The Federation of Women’s Institutes had been run on a county basis but in 1985 the Federation was reorganised into more manageable sections, 22 areas instead of 6 counties. Previously Limavady was part of the Co. Londonderry area under the
responsibility of two Executive members, Eileen Glover of Moneymore and Helen
Livingston, Garvagh. At the AGM in 1985 a new team of 22 executive members was elected and Doreen Nicholl represented Roe Valley and served for 3 years. Since then Aileen Gault has served for 6 years (1988-1994), Lindy Scott, Terrydremond served 6 years (1994-2000), Emily Blair, Ballykelly served 6 years (2000-2006), Lindy Scott served another 6 years (2006-2012) and currently Roberta Bradley elected in 2012 to serve 6 years.

In 1948 Miss Shearmon saw the need for a centre for the women of the district to meet for special and
educational activities and soon after a Women’s Institute came into being. The Formation meeting was
held in the school on November 11th 1948. From a committee of 10, the office leaders were as
follows: President Miss R. S. Shearmon, Vice President Miss Mooney. The Secretary was Miss Morrison and the Treasurer was Mrs M. McCaughey. Membership for the first few years numbered at 20 but over the years almost doubled. The activities of the institute have been many with varied craft work being the most popular of pursuits. The institute like others has been a great help and benefit to the local community.

The women’s Institute rules were read and explained, and then the members formed groups to make suggestions for the programme. It was decided to hold the monthly meetings on the third Tuesday of every month, in the Court House at 7.30pm, the first meeting to be on March 15th, 1949. In the early 1950’s meetings moved to the Guildhall and in 1965 to the Intermediate School, before moving to the sports pavilion in 1985 and, finally in the 1990’s to what is now known as Glenshane House.
After starting the year celebrating their 60th anniversary, it was with great sadness that their Christmas
Party at the end of the same year was to be the final meeting for the 14 members of Dungiven W.I., some of which had been members for over 50 years.
To view the exhibition panels click here https://niarchive.org/resources/?fwp_resources_search=womens%20institute
To view photographs that were on display during the exhibition click here https://niarchive.org/explore-the-archive/?fwp_collection=limavady-womens-institute