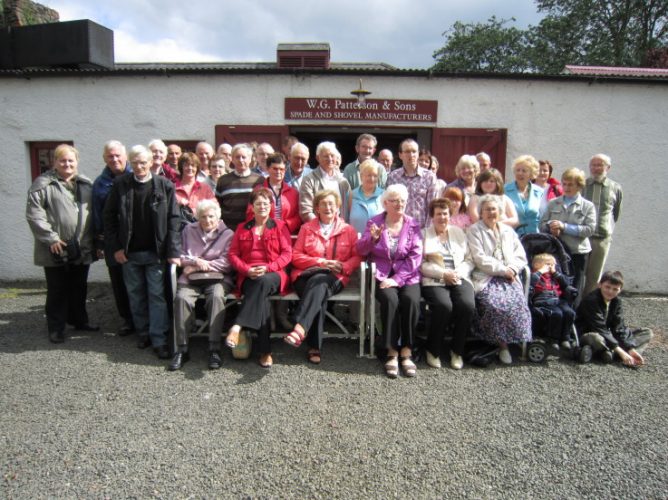 A reunion of former pupils of Gelvin (Galvin) school was held on a very wet day in July 1997 with around ninety former pupils in attendance. The school had closed in 1967. Despite the craic and party atmosphere dismay was expressed by all who attended at the advanced state of decay of the building, especially the roof and floor structures.

Following this gathering a formal meeting was arranged for Monday 10th November 1997 which was attended by around thirty people from the area, many of whom were past pupils of the school. The purpose of the meeting was to discuss the then present condition of the building and what steps could be taken to address the problems. Before the meeting concluded it was agreed to form a committee whose task it was to explore how best to approach the problems and deal with the various obstacles likely to be encountered.

Gelvin Community Association was therefore born on Monday 10th November 1997 and has been alive and active since that date.

Below are some of the people who attended the Reunion in 1997. 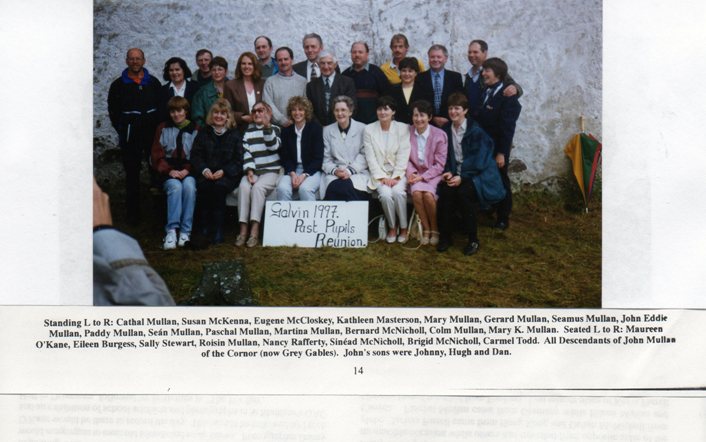 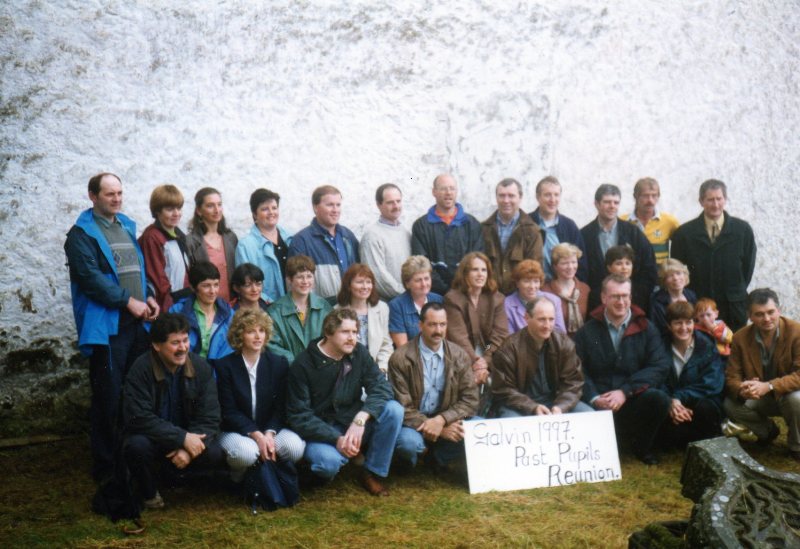 The Association provides social, educational and recreational activities for those living in the area with members taking a keen interest in the area’s heritage.

In addition to regular ongoing activities the Association has undertaken a number of “one off’’ projects/events.

Events like “The Day in the Moss”,  the “Old time Week-End” at the Doherty House in Gortgarn and “The visit to the clahan’’ in Lenamore were major successes. 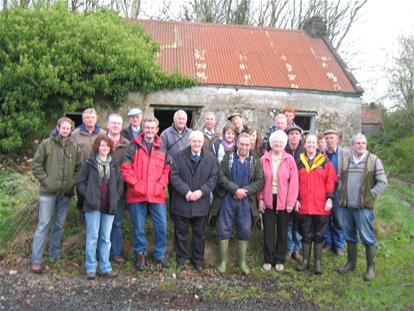 2006 was the year when the Association undertook preservation work to the ruins of the penal period chapel (Tannyranny) in Gortgarn.

However, the formation of the now much heralded Gelvin Historical Society may be the Association’s greatest success story.  The group has recently completed two years research and collation of information, which has resulted in the publication of “Gelvin The Home Place”, a wonderful historical record.

It documents life in the area from the time of the great famine to the present day.  The variety of articles, compiled by local amateur historians include descriptions of houses and churches, the use and legacy of ancient farming methods, changes in land tenure, population shifts, marriage ceremonies and children’s lives.  We see how global events impacted on this area, how we were affected by emigration, how the growing of flax for the once mighty linen industry came and went, the paying of rents to absent landlords and the hosting of evacuees during WWII.

There are numerous photographs in the book, which illustrate these diverse stories and feature a number of now forgotten dwellings and people who would have referred to them as “the home place”.

Paul Mullan Head of the Heritage Lottery Fund Northern Ireland states “The Gelvin townlands project set out to explore the heritage of the area and the stories and histories of those who lived and worked there from 1850 to the present day.  This publication brings together the research for the first time to create this unique historical record which details the social and economic changes experienced within the area and by its communities during the past 150 years.  We hope it will provide interest and insight into the past for generations to come’’.

John Hamilton, Community Outreach Officer Causeway Museum Service, states “The Gelvin project shows how much can be achieved by a local group exploring their own heritage.  I’m sure it will be an inspiration to communities everywhere’’.

This unique publication would not have made it to print without the financial input of the Heritage Lottery Fund.

The building was erected in the early 1840s as a Catholic chapel and served as such until 1901.  On the erection of a new chapel in Drumsurn in 1901 which replaced the old Drumsurn chapel and the chapel in Gelvin, the building became a centre of education and learning known locally as Gelvin (Galvin)School.  It was highly regarded in educational circles and served the community well until 1967 when a new primary school opened in Drumsurn to serve the whole community. 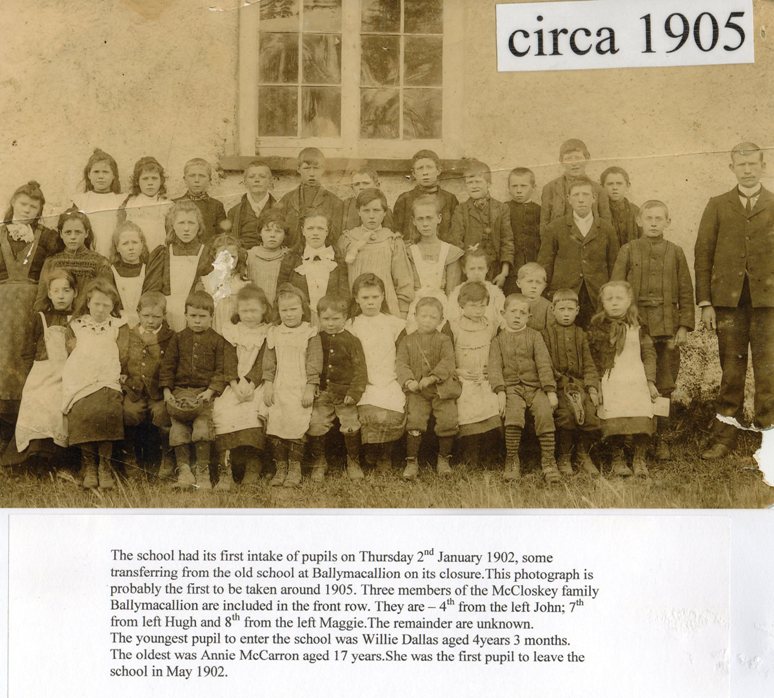 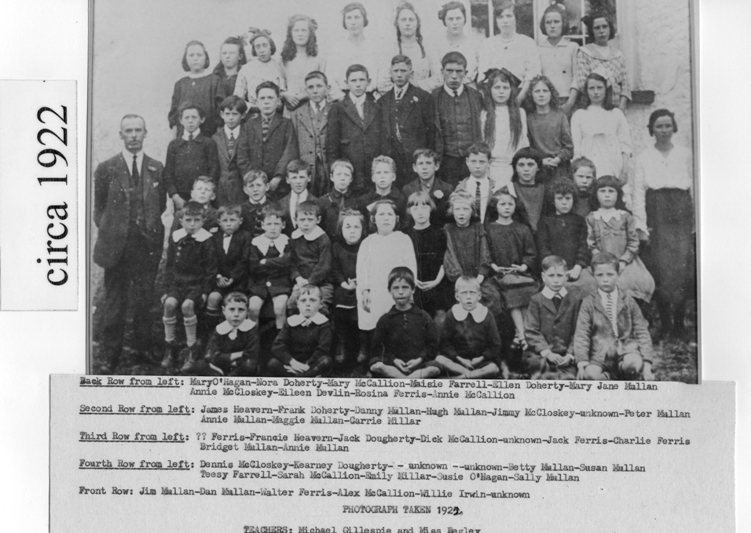 Picture of pupils and teachers in the early 1920s

Following this it served as a youth club, concert hall, dance hall and sports hall.  However, with the passage of time the fabric of the building deteriorated to such an extent that it became unsafe and ceased to be used from the mid 1980s.

Gelvin Community Association subsequently purchased the building and surrounding grounds in 1998. (Dungiven parish retains ownership of the graveyard).   Substantial restoration work was then carried out with aid from a variety of funders, community fundraising and voluntary work.  The improvements to the building, grounds and the adjoining graveyard were of a very high standard and it was a proud day for the association when the refurbished premises were officially opened on 26th June 2000.  It has served as the Gelvin Community Association headquarters since then. Additional improvements have been carried out in the past twelve years. The parking area has been tarmacked and a portion of the exterior of the building re-plastered. Oil fired central heating has also been installed. 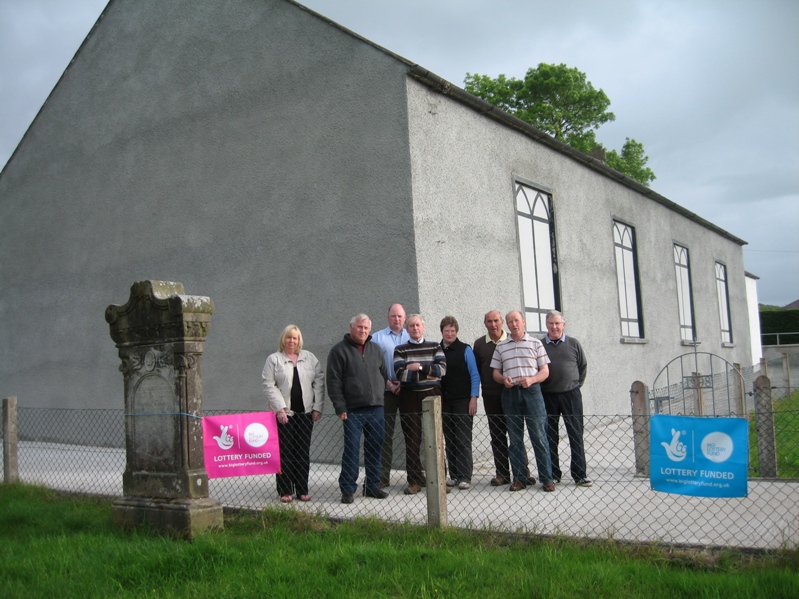 Portion of the exterior of the building was replastered in 2010. Some members pictured following completion of the work.