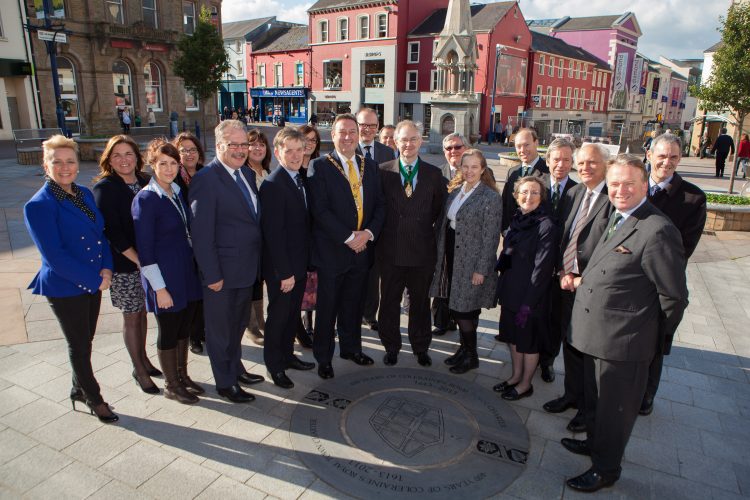 Download the Coleraine 400 Heritage Trail Brochure below!
The following langauges are available:

Launch of the Coleraine 400 Heritage Trail Plaques and Lecterns 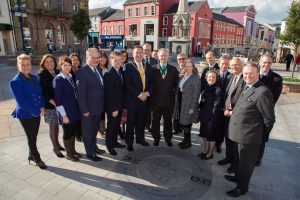 AS part of Coleraine Borough Council’s ‘Coleraine 400’ project a new Heritage Trail of Coleraine town has been produced. The Coleraine 400 Heritage Trail plaques and information points, as well as the new Coleraine 400 learning resource were launched on Monday 14th October 2013 by Mayor of Coleraine, Councillor David Hardingand Chair of the Coleraine 400 Steering Committee, Councillor Mark Fielding. Both the trail and learning resource have been generously supported by the Ministerial Advisory Group (MAG) Ulster-Scots Academy, Department of Culture, Arts and Leisure, as well as The Honourable The Irish Society. During a visit from London, members from The Honourable The Irish Society attended the launch and enjoyed a tour of Coleraine with archaeologist, Nick Brannon. The Coleraine 400 heritage trail enables residents and visitors to the Borough the opportunity to explore the historic centre of Coleraine – where the gridded street pattern of the 17thcentury town, remains largely the same today. It reveals the importance of the port of Coleraine, considers how the plantation affected the town and reveals the legacy left behind in 2013.

The trail is supported by the Coleraine 400 learning resource, which is also a useful tool for teachers in the classroom. 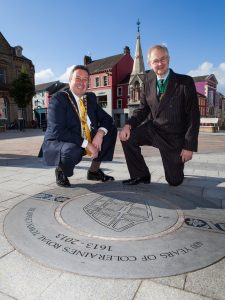 Edward Montgomery of The Honourable The Irish Society, commented “The importance of this event to the Irish Society was demonstrated by the presence of the Deputy Governor, Mr Simon Duckworth, accompanied by 2 Aldermen and 4 Councillors from the City of London Corporation, as well as Mr John Barradell, the City’s Town Clerk and Chief Executive who was on his first visit to Coleraine. All the visitors stated how impressed they were with Coleraine’s ‘400’ celebrations and projects in general, and the new Heritage Trail in particular. It has helped to cement the link between Coleraine and the City of London as we jointly celebrate a milestone in our relationship and embark on a new era, in which the Irish Society is already working closely with Coleraine Council and other bodies to develop the local economy and promote inward investment to the area.” Four hundred years ago Coleraine played a key role in the County Londonderry Plantation. On 28 June 1613 King James I granted Coleraine its Charter. In order to mark this extraordinary event in our town’s history, Coleraine Borough Council plan to leave a legacy and promote the heritage of this area for local people and visitors.

In November 2012 Coleraine Borough Council secured generous funding from the Department of Culture Arts and Leisure Ministerial Advisory group (MAG) Ulster-Scots Academy and The Honourable The Irish Society to develop brochures and signage for the Coleraine 400 Heritage trail as well as a Coleraine 400 learning resource pack for schools.

On the 28th June, to mark the anniversary of our Town Charter and the launch of the Coleraine 400 Heritage Trail brochure pack, two guided tours with archaeologist Nick Brannon will reveal the hidden history of 17th-century Coleraine.

The tours will be held at 1pm and 5.30pm, meeting at Coleraine Town Hall. These tours are in advance of the planned Autumn installation of permanent Coleraine 400 trail signage at key places on the trail and a legacy piece in the Diamond.
18th June 2013