You learn about each other.

Naresh tells us about his first day at school in Northern Ireland. “I came here and my father took me to a shop in Ballymoney to fit me up with a school uniform and sent me to school the next day, on Friday morning. The systems in in school here were completely different. Back home in India all the pupils stayed in the class and the teachers would move around. Here, I had no timetable and I didn’t know what was happening. When the first period was over, everybody just went out and I was stuck in the corridor. I didn’t know where to go. A teacher showed me where to go, but when that class finished they all went to another classroom again. Then it came to half past three, the bell rang and everybody went into the bus. My father had told me that morning: ‘Look, the bus will be waiting for you outside the school, you just sit in the bus and come to Portrush.’ But, when the bell rang, the buses left without me.”


Kiran tells us: “I remember when I was in primary school, at the age of 9 or 10, and one of the girls said to me – this is what she actually said – ‘Lift up your skirt and tell me, are you dark all over?’ And then she said ‘Oh, but you’re much fairer on the thighs than on the legs!’ But that was because they had never seen anyone like me. And there were advantages as well – my mother used to go into town only very rarely, maybe once or twice a year. I was working then and my colleagues would say: ‘I saw your mother in town, she was wearing a lovely sari and looked very pretty!’ Maybe it’s the age as well – when children are 9 or 10, they are ignorant. You can’t blame them, but it was hard then. It makes you feel different as well. However, when I applied for my job at the office, there were two other girls, both Irish, and I, as the only Indian, got the job. So, things changed. 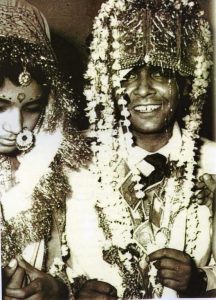 Satish tells us: “When we came here, everything was so new for us. We were missing our families. All the people here were new, even our husbands. We hardly knew them – it’s not like here, where people court for 2 or 3 years before they get married. You just wonder sometimes – the courtship goes on for longer, then they get married and then they get divorced! Did they not know each other before? People ask me: ‘How could you get married when you knew nothing about your husband?’ I think that’s the best thing. You learn about each other each day and love gradually grows. After that, you either love your husband or wife, or hate them. In our case, it was mostly love.”

Naresh adds: “Here, people go out for 4 or 5 years and they compromise a lot. Everything is rosy and perfect, but the day they take the vows and put the ring on, there’s a 100% change. Suddenly the boys are under the girls’ thumbs!” Satish counters: “It’s not always like that. Maybe in most cases, but certainly not all the time.” Jai adds: “After the wedding ring comes, the suffering begins. Engagement ring, wedding ring, suffering! That’s an old joke in India.”

Satish: “I can say for myself that, even though I knew nothing about my husband or his family before, I was a very lucky person. I was one of the lucky ones, even though we didn’t agree with each other all the time. Of course there were ups and downs. Indu adds: “Some marriages are more ups than downs, haha! In effect, a wedding is just a contract, they should make the get out clause easier.” Jai: “One of my friends used to say: ‘They have an expiry date on everything nowadays – why don’t they have one on marriage?'”

Naresh explains that family life is the same in different countries. “Everybody goes through bringing up children. We all went through the same things.”
“Partly because of their religion, which is mostly Hinduism, Indian people are fairly strict with their children. They are supposed to obey and to behave themselves. Also, in India it is not usual to say the name of an older familiy member. We will say uncle or auntie, but we never call them by name. So we were very surprised to hear young children calling their older relatives by name. Old people are very much respected in India. You treat them well.”
“The reason that we Indian people mix up so well in other societies is because our own society is very diverse. We’re used to living together with different religions. Also, when we came to Northern Ireland, the local people didn’t have a lot of experience with immigrants yet. That’s how we were accepted into the community here. My daughter was born and brought up here, and when she went to London to study and got homesick, I said to her: ‘But there are so many girls from India and Asia in London!’ But she thought there were too many, she wasn’t used to that. She used to be the only one in her school.” 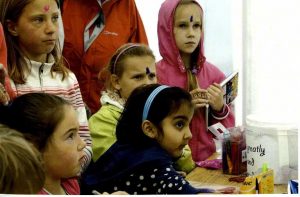