We complemented each other.

“The first family came in to Northern Ireland in 1935. Most of our community group came here after we got married, around 1970. I have always wondered why the first family came over. It usually started with the husband coming over first and then the rest of the family followed. Nearly all Indian families were self employed, because then you didn’t need a work permit. People in Northern Ireland at that time had big families and couldn’t afford clothes so easily. The Indian people set up shop selling mostly clothes and fabrics, so it worked out well for both the original inhabitants and the immigrants. We complemented each other. Now, the new generation – our children and grandchildren – are well educated and have good jobs, usually in England or the United States. That was one of the reasons why some of the ladies from the Asia over 50s Club were isolated – their children had moved away.”

Indu tells us: “The differences between Northern Ireland and India were numerous: culture, food, language, weather. Even though many of us had English as a second language, the accent here was very different. I used to miss having Indian television and Indian songs. I remember that when I used to see a plane I got very homesick.”

Jai: “By the time I came here it was summertime. I stayed in Portrush and it was so busy! I used to write letters home about how many people there were and how nice it was. But when September came I wrote my mother: ‘Mummy, it’s like a wedding where all the guests have left in Portrush now!’ Adjusting to the food wasn’t too bad – we could get Indian food from Belfast quite easily. Indian people love their chillies, so as long as we had red chillies, we were okay, haha.” 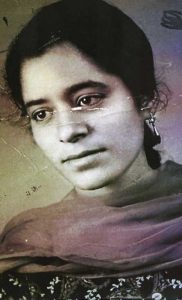 Satish: “Me and my husband stayed with his uncle who was married to an Irish woman. The first morning – when my husband was away to work – I had my first breakfast in Northern Ireland. Cereal, a jug of milk, toast and some butter. I had never had cereal before, we used to make toast in a different way and I had never even used knife and fork before. When I put the first spoonful in my mouth, the tears were streaming down my face – I had not expected this! It took me a long time to get used to it. We lived with this uncle and aunt for 8 days. On the 9th day, they told us that our bed had arrived in our house (that was still being renovated). I told my husband: ‘We are sleeping in our own house!’ We didn’t have a table or chairs yet, but it didn’t matter, as long as the bed was there, haha!”

Indu: “Northern Ireland is a close society, but they are very welcoming. We feel that we are part of the community. I lived in Ballymoney, which is a small place, and we had a business there for a long time.When we closed the business, people were sorry about it. It was the relationships we buillt with the customers. I do not feel like an immigrant at all.”

Kuldip: My husband, who was a doctor, worked in this small village. It was such a close-knit community, it felt almost like family. When he passed away, his patients felt very sad about it. One reason that we have been taken up into Northern Irish society so well could be that the Irish also have a history of migration and oppression, just like India. Our stories are similar.”

Naresh “Everybody was self employed at that time. The husbands would go out to work and the wives would take care of the children.” Indu: “I think many of the wives ended up working too by the end, and they also had the children, haha!” Jai: “Yes, I started my own business as a dry cleaner.”

“People didn’t try for jobs which meant working under a boss, because you had to have a work permit for that. Most people were set on starting their own business anyway, also because they didn’t have the right type of qualifications to start working in a Northern Irish company. Later on, it got easier to work. The Indian people were not threatening to the local population because we did not take their jobs – on the contrary, we were providing services. There were three D’s that were typical Indian professions: doctors, drapers and dry cleaners. Many doctors and dentists came from India, there are still plenty now.” 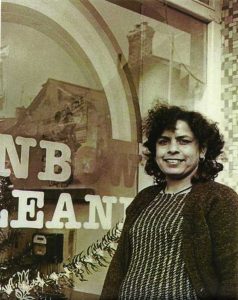