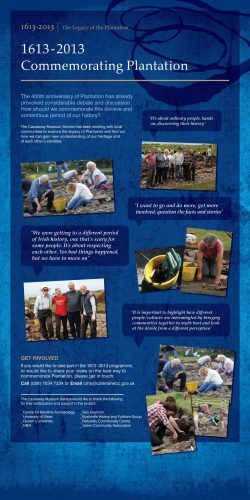 The Plantation of Ulster

Following the Flight of the Earls in 1607, the lands held by the rebellious Gaelic chieftains in Ulster had been confiscated. King James I of England decided that in order to ‘pacify’ and ‘civilise’ Ulster he would colonise these lands with Protestant English and Scottish tenants.

The Plantation transformed Ireland’s social, political, cultural and physical landscape. It provided a successful template for British colonisation in the rest of the world. Its historical, political, cultural, environmental and visual effects continue to impact on the two islands to the present day.

For Catholics, the Plantation represents the loss of land and persecution of their religion. For Protestants, the Plantation and the Rebellion it provoked in 1641 created a perception of Catholics ready to take revenge and dispossess them. These beliefs have remained central to the definition of Protestant and Catholic identities for almost 400 years.

Coleraine was the first ‘planted’ town in Ulster and plays a pivotal role in telling the story of the period.

In 1600 Coleraine was already an important ecclesiastical and trading centre, situated at a strategic crossing on the Bann River with valuable salmon fisheries and abundant timber sources nearby.

To exploit these rich resources, a new fortified settlement was built by The Honourable the Irish Society, representing the 12 livery companies of London charged with planting Co. Londonderry. The town was laid out in its present form, surrounded by an earthen rampart and a ditch. Coleraine received its charter in 1613.

Uniquely, entire terraces of English-style houses were constructed at one time using prefabricated wooden frames. Chance discoveries in Church Street and New Row in the 1980s and 1990s found evidence of these houses hidden behind modern shop fronts.

This site is strongly associated with the O’Cahan’s, the dominant local Gaelic clan. But archaeological excavations discovered another side to the story that had long been forgotten.

The O’Cahan’s founded an Augustinian church here in the 12th century and by the late 16th century they had added a (secular) tower house. In 1602 Donal Ballach O’Cahan submitted to the English Crown and Dungiven was garrisoned by English forces.

By 1611 Captain Edward Doddington had ‘re-edified’ the ruined castle and church and built a 2-storey English-style house and outlying buildings.

The Doddington buildings suffered a major fire and collapse in the late 17th century and the site was abandoned.  A second bawn was built in Dungiven village around 1681 (part of which still survives at DungivenCastle). Until archaeological excavations in the 1980s, the Priory’s Plantation history had been attributed to this later bawn. In popular memory, the legacy of the O’Cahans had defeated that of Doddington.

Dunluce is one of our most iconic monuments, but in archaeological terms we know little about it. Through recent excavations that has begun to change.

The foundations of a large medieval hall were uncovered within the castle, probably relating to the McQuillans, who were expelled by the McDonnells in the 1550s.

Originally from Islay, the McDonnells came to control much of Co. Antrim, with Dunluce Castle as their main seat of power. Close to the castle, the intact foundations of a town were uncovered. Built by Randal McDonnell in 1611, this town was equivalent in scale to Coleraine and was a significant attempt to mimic the ‘official’ plantation in Co. Londonderry.

The town lasted only about 25 years before it was attacked and burned in the 1641 Rebellion. But there is evidence of several other 17th-century towns built by the McDonnells across North Antrim – an ‘unofficial’ plantation that has as significant a legacy as that led by the Irish Society.