Shared Music of Dalriada – The Thatchers of Glenrae

Protected: Who do you think you are? Getting started at PRONI

Shared Music of Dalriada – The Thatchers of Glenrae 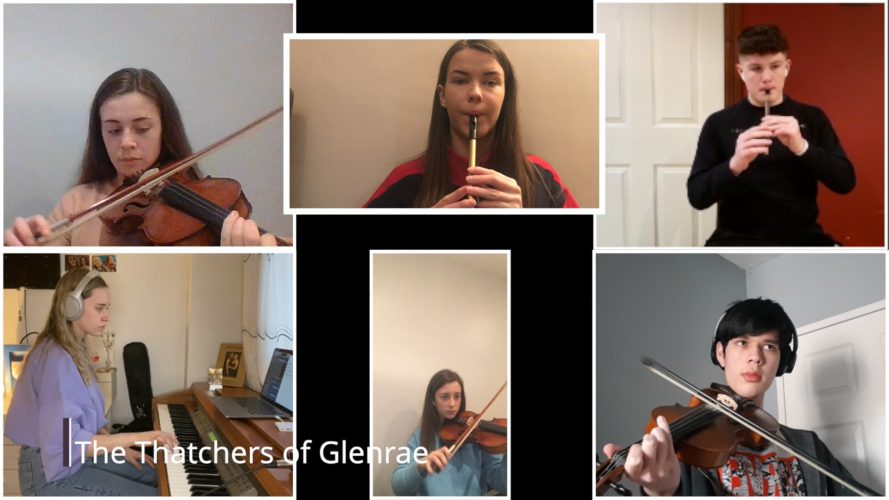 A Causeway Coast and Glens Borough Council project is celebrating the shared musical traditions of Rathlin Island, the Glens of Antrim and the Mull of Kintyre with the third of three special online performances.

The initial aim of the Shared Music of Dalriada project was to bring young musicians from the Glens of Antrim Comhaltas and the Mull of Kintyre Music Festival to Rathlin Island to explore their shared musical traditions. Due to the onset of the pandemic, this wasn’t possible and instead the project adapted to our new social circumstances and moved online, with participants recording themselves at home and producing joint virtual performances.

The Thatchers of Glenrae, is a ninteenth century song composed by Hector McIlfatrick, a thatcher of Ballycastle, who died shortly before 1900. It speaks of an Irish labourer seeking work in Argyle and was learned there by Hugh McMillan of Kilbride.  He, in turn passed the song to the collector Mr. A. McEachran of Kilblaan and from there it was passed back to Sam Henry of Coleraine who included it in his Songs of the People collection. The song, with a smattering of Irish and Scots words present in some verses, is therefore a living record of the traditional movement of people, as well as music, back and forth between northeast Ulster and southwest Scotland.

The first time I came to the Shire of Argyle,
I went up to Dalmore where I wrought a good while.
My work there being finished, Big Jamie did say:
“Will ye gang and theek rashes twa days tae glenrae?”

Now when I crossed over the mountain so high,
I met an oul’ man with a patch on his eye.
Who took me for a stranger, saying“What brought you this way?”
“I was sent by big Jamie to thatch in Glenrae”.

The farmer spoke shyly, saying
“I’ve little to do”. Thinks I:“Perhaps you’d rather have Jamie or Hugh?”
And either to frighten of scare me away,
“Can you theek wi’ ould rashes?” says McNeill of Glenrae.

“I can theek wi’ ould rashes, wi’ heather or ling’
Bent, bracken or dockens or any wan thing”.
“Oh you’re just the man’ll get plenty tae dae,
And I’ll get you a ladder” says McNeill of Glenrae.

I waited on there till I finished my job,
Then it’s o’er yon wild mountain I had for to jog.
Should I stay in this country till my hair it turns grey,
Oh, I’ll never go back for to thatch at Glenrae.

My wife’s name’s Ann Connell, we live at the mill,
In a neat little cottage at the foot of the hill.
And I do think long of her when I’m away,
And I’ll fetch her the money I earned at Glenrae.

So I took the notion it’s home for to go.
I went to Ballycastle but the wages were low.
I went up to Hughie and this I did say,
“I’ll go back to Kintyre, but not to Glenrae”