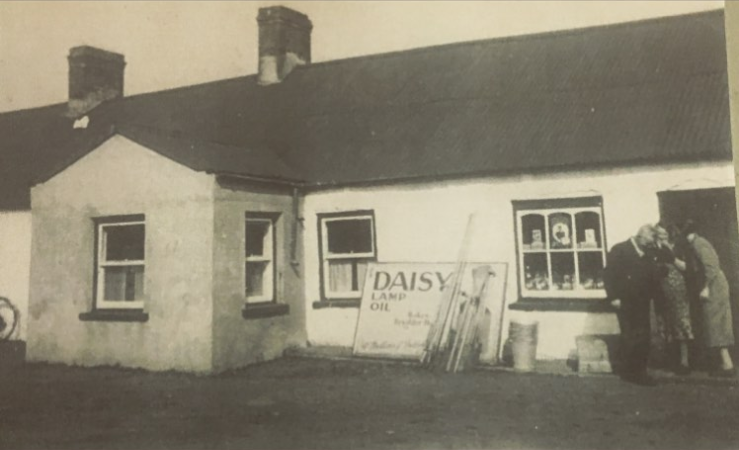 Rural shops were often adjoined to family homes in the Toomebridge area, with each populated by memorable characters. This photograph of Liddy’s shop in Cargin was taken in 1950 and sharing a conversation at the shop threshold are brother and sister Harry and Ginny Doherty and Mary O’Boyle (nee Liddy). This shop remained open until larger competition and the retirement of Mrs Liddy forced closure in the early 1990s.

Interviews held by the archive at TIDAL Toome offer an insight into the shops and businesses in the Toome area during the mid 20th century and the people who occupied an important commercial place in the community. Edmund McCann recalled during the Memories of Duneane project the range of shops on Toome main street and the business he conducted with them under the counter,

“On the main street in Toome there were two grocers and general hardware shops; one owned by James McCann and the second owned by Frank Stewart. Farmers could be seen with their horses and carts collecting meal for cattle and pig feeding, as well as the week’s groceries. There was a confectioner’s shop owned by Kate Marron beside the railway, and on the opposite side of the street was Mullholland’s Drapery shop. This was run by three sisters; Bridget, Annie and Eva; and they had so much material and so many clothes in the shop the customers always had great difficulty in finding anything. At the gable end of the shop, alongside the footpath, was the village pump, from which villagers used to carry water in buckets, and a trough where the carters used to water their horses. As a young boy, I got to know a wee man called Bob McMillan, a carpenter by trade, and his wife had a wee shop. He asked me if I would catch him a rabbit and bring it down on a Saturday. I got the snares in action, set them on Friday evening and on Saturday morning I collected my kill for the night, sometimes four or five rabbits. I picked the best for Bob and he gave me eightpence and sometimes tenpence and I had the contract of supplying Bob for two winters. I took my remaining rabbits to Aaron Corr for sixpence each. Aaron exported all his fowl and rabbits to England, and on Saturdays I left the meat in a butcher’s shop in Magherafelt, Paddy Louden’s, and next door in a confectioner’s shop owned by Maggie Totten.“

Gerry McCann, a grocer from Toome who was interviewed for the South Antrim Living Memories project, became an early mentor to the current Director of TIDAL Toome, Una Johnson, and has left an indelible impression on the collective memory of the community. His words have been preserved by volunteer interview teams who contributed to the project between 2013 and 2015. McCann’s grocery stores was the oldest business in Toome, founded by his father James in 1917. Gerry was involved in the running of the business from childhood, and when he was a boy spent his days delivering goods on a bicycle, and later a small van, for a 10-12 mile radius to the local villages.

“In the days before pre-packaged food, tea was weighed out, and cheese was cut to whatever size the customer wanted. I can remember people calling for their weekly shopping in a pony and trap. Groceries were wrapped up in paper rather than in plastic bags. In the shop you had to have a wee bit of tick to allow people to pay for their groceries when they could afford them. It was frequently the case that the mothers and wives brought five or six cases of eggs to the shop instead of handing over money.”