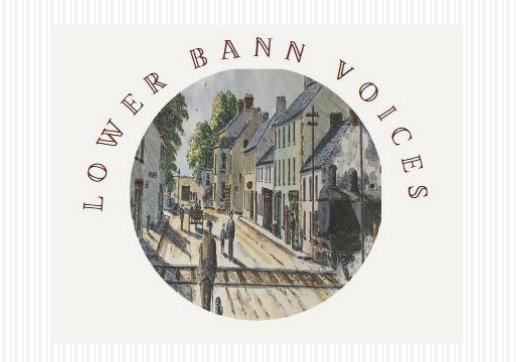 Recorded in 1994 at a social history meeting at Toome Primary School, this interview offers an insight into the drinking habits, courtship rituals and storytelling culture in small inns in Northern Ireland. Bessie Quinn was one of several community stakeholders who engaged with the cross-generational audience at the event and shared her memories of rural life, working in a public bar (the Crosskeys Inn), and the stories of characters she encountered there.

Her story has been kept as a transcript in the TIDAL Toome archive and has been added to the NI Community Archive to offer a female perspective of pubs as social spaces, which were male dominated in the 20th century in Northern Ireland. Bessie’s vivid memories of childhood places, games, tastes and traditions are also a valuable record of how oral histories can collect the most intimate of early memories.

I remember when I was young drinking out of little mugs and tins. Sometimes we had enamel mugs, but the china sets were kept for special occasions. My grandmother bought all the groceries from a fellow who called weekly at the door from Ballymena. His van was well packed with most things that were required for the ordinary household. When a certain amount of money was spent you got savings stamps. They were put in a book and when enough were saved you could get a nice tea set.

My home was a happy, talented one as my maternal grandparents lived in the same house. My grandfather and uncle played the fiddle, and my mother and aunt were good at singing. My mother could also play airs on the fiddle, but I must admit I didn’t inherit any of their talent. The house was filled with music as different ones came along to have lessons on the fiddle, taught by my grandfather. The older people often called at the house at nights to “Ceilidhe” as it was called then. I was not allowed to sit up with the grown ups when they told yarns and ghost stories, so I had to go to bed with my sisters. We came downstairs, unknown to them, and listened in; got frightened and didn’t feel like going to bed again.

I look back fondly on the different games we played. We dressed up in long frocks and high heeled shoes and hats. The high heels were difficult to wear then, but we thought we were great ladies. My favourite game was skipping, though we played ball and hide and seek too, also played having a little shop, and brought different things out of our house to the garden to fill it up and look like a real shop. We went for long walks in summer time, and picked wild flowers, but I liked the winter, especially when the snow came. We gathered up a crowd and set off on a good evenings snowballing, and the sweat was pouring from us when we came back in again.

In the evenings coming from school we would leave our school pals to near their home. They then would do the same in return with us on another evening. We didn’t mind the extra walk, as we lived on different roads. It was great fun and we enjoyed it. I remember one evening watching two old ladies trying to get a cow out of a ‘shuch’. We had only been out of school and were watching them. They were almost in tears but we seemed to enjoy it as we laughed at them. Finally a fellow arrived and helped them, so we moved on.

We walked to school, got the occasional lift with a neighbour who lived near us. He had a little pony with a crate on a type of flat cart. It was for holding the fowl in. He was called a “Fowl Man” and went around the countryside collecting fowl. He always gave my sister and me a lift when he was passing by. We sat high up on top of the crate. The pony galloped all the way to our house.

I enjoyed the day outings with my family to Portrush, and two buses left at the end of the road every fortnight or so. The food was very wholesome when I was young. Potatoes, porridge, and rice were in every household then. All home baking was done with an oven pot. My grandmother could bake any kind of bread, and her favourite were the scones on the griddle, oat cake and potato bread, or fadge, as it was called then. The oat cake and potato bread, when buttered hot from the griddle, tasted delicious. I tried to pick up as much as I could baking with my grandmother, but I could not compete with her. Most of the people were good at baking in those days, as it was done daily, and they were used to it.

I worked over thirty years at the Crosskeys Inn, and during that time I met many different people – I never had a dull moment I should say, as I enjoyed my work and felt happy at it. The Crosskeys was thatched with an L-shaped roof, and was originally built as a coaching inn; the stage coaches stopped at the inn on the crossroads on their journey from Belfast to Kilrea. When two coaches were in operation in the 1800s, they carried passengers and mail. One of the stage coaches left Belfast at eight o’clock in the morning and didn’t arrive until four o’clock the next day in Coleraine. A stop was made in Randalstown coming through.

It has been a post office and shop at one time owned by two sisters by the name of Boyd. They were a Quaker family and their burial plot was a mile and a half from the pub. The inn was then owned by a man who was a linen merchant. He had it for many years, and then passed it on to his nephew after his death, which meant it was still in the same name until 1964. The present owner is in it for over thirty years.

Many changes have taken place over the years as regards drink. One could go into it now and ask for any drink they like and get it, but going back to when I started in 1964, a very limited drink only could be got from the owner. The owner didn’t stock a big variety of drink then, or maybe perhaps the drink was a little different. Guinness was a real favourite and popular with the old people. Children were not allowed into the pub then. They could get sweets or minerals handed through a little open pane of glass which was in the window for that purpose. The closing hours were much earlier than today as it closed up around nine o’clock.

I only lived fifteen minutes walk away, but I cycled each morning. The opening time was ten o’clock then. I always went earlier so as to have any washing or cleaning done before anyone arrived in. My first customer of the day was a doctor, and he called every morning. He was a retired man with a wife and two of a family. Most of his working life was carried out abroad, except for a short period he helped out in a surgery somewhere about the Glens of Antrim. He was a nice man and full of life. He told me that when he married his wife couldn’t even boil water, but she started reading cookery books and became a great cook. His favourite before going to bed was a mug of tea with a slice of bread, well buttered, and a great hunk of cheese on top, and I often served it as one of his night caps in the bar.

On one occasion a fellow who worked at the doctor’s place arrived at the pub, taking the day off to spend a few hours drinking. He didn’t expect the doctor to be in, so the fellow had just got his drink when the doctor passed by the window. The fellow saw him, made a dive for one of the doors, and took his drink with him to one of the rooms at the bottom of the bar. When the doctor arrived in, he told me he thought he heard a noise and that someone must be around, and he insisted I go around all the rooms to check. When I went to the bottom room the fellow was sitting at a table taking his drink. I couldn’t speak, so I just shook my fist at him to keep quiet and made my way up to the bar again, and told the doctor I didn’t see anyone. I found it very hard to keep a straight face and tell the doctor a lie. When the doctor had left the fellow came out of the room and we had a good laugh together. He was delighted that he wasn’t found out, for he would have had to make up an excuse for missing the day.

The next character that came in was a farmer. He owned two farms, one of them being quite a few miles from his home one. He had a great eye for the ladies. His talk was always about women. He would tell me about the different girls he took out and where he took them to. One particular place was one of his farms. The view seemingly was quite nice in summer, with plenty of flowers to admire. He had a favourite spot at it where he did his courting. He never got married, just kept on talking about women. He called at the pub every day, sometimes twice. He was the jolly type of person and kind. He brought me boxes of chocolates on many occasions and I thought at times he had an eye for me, so I kept waiting, thinking he would propose, but he never got around to it. So here I am, left on the shelf.

The next old fellow who came to the pub was good craic. He also owned a small farm, but worked out as well. He talked a lot about the old days and how hard they all had to work, but they all had good health and enjoyed life. He also had time for the girls as he cycled every week to Belfast to see one. It was over thirty miles from where he lived, and I said to him one night that he must have been in love when he went so far, but he left her in the city and married a local girl, and they had a large family.

There were many bachelors in the area who came to our pub. One worked his farm for quite a number of years, and had a lonely kind of life as his six brothers and one sister went to Canada. He took a girl out for over ten years and a fellow came along and took her from him. It left him broken hearted and it took some time to get over his heartache, but when he got back to his usual self again he enjoyed life to the full, and came to the pub every day. When he was happy he would give the verse of a song, was full of laughter and everyone in the pub knew him. He loved his drink and took plenty of it, but he has passed away, living to be 86 years old. It goes to show drink doesn’t kill, or should I say, taken in moderation.