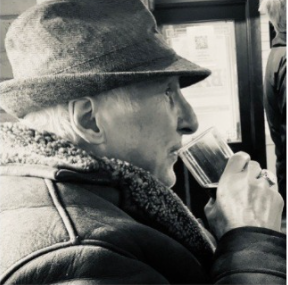 The Character; a photographic depiction of the enigmatic storytellers who hold court in pubs in the North. Image taken by Nigel Flynn 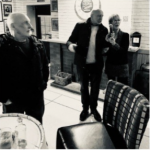 Your typical pub conversation as the ‘character’ for the evening holds court over an enthralled audience. Nigel relates his memories of many such characters and reflects on the pub as a vital social space in the past that has been slowly fading in prominence in the community. 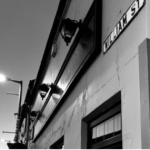 William Street, a busy street populated by publicans in the past, offering shelter for visiting tradesmen and patrons alike. The Farmer’s Rest was a busy trading pub where merchants could store their livestock in a byre for the old Fairhill Market. 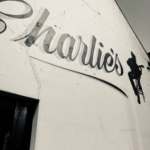 Nigel’s local, Charlie’s bar. The image was taken by Nigel Flynn himself, who is a passionate patron and would like to see a revival in pub culture. During the oral history interview, Nigel reflected on how each barman could cultivate a different social identity for his pub based on sporting, political and societal attitudes.

This interview was recorded on the 16th of March 2022. The interviewer was Michael McConway, Heritage Project Assistant at TIDAL Toome, and the interview was conducted as part of the Lower Bann Voices Project.

Nigel opens the interview by discussing his early life and offers contextual insights into generational attitudes towards drinking and pub culture, stressing that his grandfather’s generation were averse to imbibing alcohol or visiting pubs due to their strict religious upbringing. By contrast, the generational gap meant that his father and mother were keen to explore social life in the community via visiting public houses and going to dance halls such as the Flamingo in Ballymena. Nigel recounts that he has early experiences of both town and rural life, as he spent many of his formative childhood years with his grandparents in Portglenone whilst his parents worked and socialised at weekends. Nigel also describes the religious background of his community and how his family fitted into this; he reflects that though his parents’ mixed marriage was a taboo in the past, his own children’s generation have moved on, and he feels that this has been vital progress.

Nigel emphasises that he was the first in his family’s generation to be given the opportunity to head to Queen’s University to study and remembers fondly the copious amounts of alcohol consumed on the strength of his university grant with much humour. His childhood memories of accompanying his father to The Deer’s Head pub are laced with nostalgia for the sugary crisps and orange mineral he was bribed with to endure a lengthy session, and he vividly recounts the tall bar counters and strange smells of these worn out saloons. Nigel gives us an insight into the predominantly masculine culture of observation and storytelling in pubs, pointing out the ludicrous idiosyncrasies of his local characters in pubs of the past. He relates a funny anecdote about a worse for wear Jim Reeves, who performed at the Flamingo Ballroom in Ballymena on Monday the 17th of June 1963, but had spent much of the rehearsal period drowning his sorrows about the conditions of the venue in a pub called The Wee Keg.

The interview touches on many diverse themes in pub culture in pubs of the north. When asked about the tradition of musical hall performances in pubs, Nigel had fond memories of Marjorie Rea, a comedienne who worked at Gallagher’s Tobacco Factory on York Street in Belfast before following her father Tom Reynolds into the entertainment industry in the pubs and clubs across Northern Ireland. Rea had been invited to take part in a retrospective music hall evening at Montgomery’s owned by John McKeown, who made a futile attempt to revitalise the popularity of live performances. Nigel argues that it was the advent of the Jukebox and Karaoke machine that stole the attention of pub clientele from costly three piece showbands and rock groups, relating his experience of seeing Gerry Anderson perform in several different groups touring in the sixties and seventies before pursuing a career as a broadcaster with BBC Radio Ulster.

Nigel’s testimony is a valuable record of social mixing during the Troubles, with different pubs classified by political allegiance or identity. Nigel offers a first hand account of the tense and nerve-inducing journey home after socialising in pubs, with checkpoints offering up unique slices of humour when his father and a friend gave their names to a patrol and were suspected of satire. The precautions taken by publicans to protect their clientele is a relic from the past but Nigel propounds his view that the Troubles contributed to pub closures in the same way that Covid restrictions and social distancing have in more recent and uncertain times. Though lamenting the loss of snooker and darts teams in pubs to the increasing sophistication of pub clientele and a lack of community cohesion, Nigel doesn’t particularly miss them. Instead, he recounts his unique passion for quizzing in pubs, travelling with friends to pub quizzes across the province. The identity of pubs as exclusively liquor saloons is one that Nigel contests. When compiling a volume of pub stories and anecdotes with a group of fellow drinkers and local historians, he discovered that William Street, populated with public houses such as The Farmer’s Rest, had once been refuges for cattle merchants and other livestock buyers and sellers to stay overnight, over-indulge with their drinking hand and store their goods in a byre out the back, ready to be sold at the Fairhill Market. Nigel has taken several photographs of William Street and other pubs which accompany this project publication which you can see in the gallery, and his words portray pubs as vital community marketplaces where traders could offer their customers a luck penny with a free drink.

One of the important themes explored in the interview is the toxic culture of masculinity that has persisted in some pubs to the present day and the history of how gender discrimination was enacted at the public bar. Nigel recalls publicans who ushered women into high-walled snugs to order their drinks by pushing a bell, and in hindsight remembers instances when women were not welcomed by male patrons. Nigel’s first hand account is an informed male perspective of how he saw gender discrimination in pubs which we can compare and contrast with research which tells the story of how Eileen Evason brought a case of sex discrimination against McGlade’s Bar in Belfast in 1979.

McGlades Bar on Upper Donegal Street in Belfast had been pioneers of pub grub since World War Two, when American GIs sold black market goods to publican Frank McGlade, who would organise the entertainment in the form of amateur boxing matches in the upstairs room. Eileen Evason, a young academic at the University of Ulster, was a leading figure in the Northern Ireland Women’s Rights Movement and in August 1978 contributed to a report for the Child Action Poverty Group revealing the high mortality rates among Northern Irish children and the social deprivation faced by those growing up in Belfast and Derry. Eileen took several colleagues into McGlade’s Bar for lunch in July 1978 and they were told entry to the public bar and ordering without male company would cause serious embarrassment to the male patrons. Evason and her party refused to move and staged a sit-in protest. In January 1979, Evason took McGlade’s to court in the first case of its kind to be heard in the Recorders Court since the passing of the Sex Discrimination  Act of 1976.

Nigel hopes that gender politics will come to be respected in pubs and clubs in his community in the same way that social mixing has become the norm in a Post-Troubles environment. His observations of discriminatory language and attitudes in pubs has only strengthened his resolve to record memories of these lingering masculine codes which he aspires to discard in favour of growing clientele and a revival of fortunes of traditional pubs in the Ballymena area and in the towns and villages which make up the Lower Bann community.