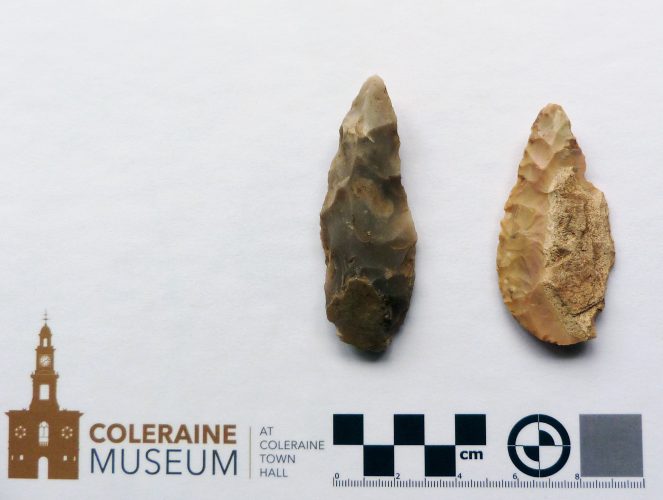 The owners of these objects used to live at Mountsandel, before the fields were built over in the 1970s. On wet days, when stone showed up against the surrounding dirt, the children of the family would walk over the ridges and furrows of the field, picking out pieces of flint from among the potato plants. The boys took the flint to a neighbour who had a keen interest in archaeology who would explain what the pieces were and how they might have been used. They have been treasured objects in the family home ever since.

By the Late Mesolithic period, stone working technology had moved away from the use of small flint tools, towards the creation of larger blades. Leaf-shaped tools of this type have traditionally been known as ‘Bann Flakes’ although that ‘butt trimmed flake’ is preferred modern term. They have narrow, distal (pointy) ends from which the cortex – the rough outside surface of the original flint nodule – is always fully removed, and broaden out towards the slightly bulbous butt which has been trimmed to form the leaf shape. On the pale butt-trimmed flake, part of the cortex is visible on the right-hand side of the broad midsection.

But how were butt-trimmed flakes used? There is a good argument to say that they were probably not hafted as spears. To do so would have required a thinning of the bulbous butt area which was not routinely conducted. As they are, the width of the butt plus a haft (and any associated binding used to fix it in place) would have meant that any such spear would be unlikely to pass between the ribs of a large mammal. However, the fact that the blades do feature trimmed butts suggests that they probably were mounted on some form of handle, perhaps in the form of a knife, to create a general purpose cutting, sawing or whittling tool.