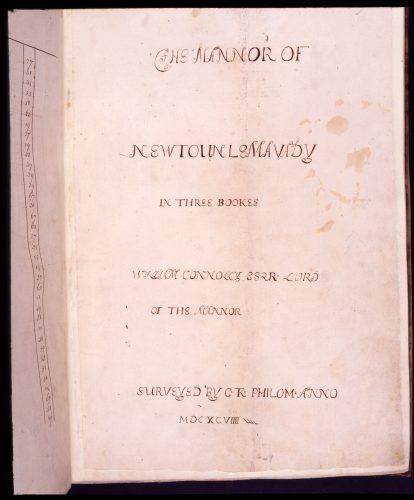 A rare early survey by C.K. Philom featuring details of buildings, land features and tenants of the townlands. Originally in three volumes, it has been rebound as one volume. Kindly donated by Cllr. B. Brown in 2003.

Edward Bunting (1773-1843) was a passionate collector of traditional Irish music. He transcribed the music of the last of the Old Irish harpers at the Belfast Harpers’ Meeting in 1792 and spend the next number of years touring the length and breadth of Ireland; collecting traditional Irish folksongs and tunes of such musical luminaries as Denis O’Hampsey from Magilligan. Bunting published a total of three volumes dedicated to the Ancient Music of Ireland in his lifetime. Limavady Museum holds copies of the two later volumes he produced.

The Buchanan Collection was donated by Mrs. Margaret Buchanan, whose parents (Mr. and Mrs. A. V. Bunn) had a long association with Dungiven Primary School –  Mrs. Bunn was a teacher, whilst Mr. Bunn was the headmaster from the 1930s until the 1970s. Consisting primarily of textbooks, stationary and school photographs spanning multiple decades, the collection provides a unique insight into the history of the school.

The Witherspoon Collection was donated by Mrs. A. Witherspoon, whose grandparents, Mr. and Mrs. Mullin taught in two national schools in Limavady in the late 19th and early 20th century (Market Street National School and Main Street National School repectively). The collection primarily consists of roll books, registers and report books from the two schools. The collection also contains a sizeable number of original slates which were used by children to write on.

Donated by Mrs. F. Sloan in 2007, the collection consists of documents, letters and photographs relating to Drumcovitt House, located just outside the village of Feeny. Mrs. Sloan was the neice of Mervyn Craig who ran the estate until the late 1990s. His grandfather, George Craig, took charge of the estate in the mid-1800s and the items in the collection provide a unique insight into the history of the family and the local area over a 150 year period.

The Limavady postcard collection consists of some 252 postcards. Featuring both photographic and artistic impressions of buildings, landmarks and everyday life in Limavady, the postcards provide a unique insight into the history of the borough.

The museum holds a range of interesting material from the Second World War including ration books, gas masks and a Women’s Land Army uniform. Also of note is a collection of emotive letters written by a local Limavady woman to her husband who was on active service in India during the conflict. Further information about the material held by Limavady Museum in relation to the Second World War can be found here.

Donated by Mr. Billy Turner, the flax breaker was used for breaking flax after retting and prior to scutching. Manufactured in 1930 by Kennedy of Coleraine for Ross’s (later Turner’s) Mill, Dungiven.