‘I mind when…’ Stories of Town and Country Intro 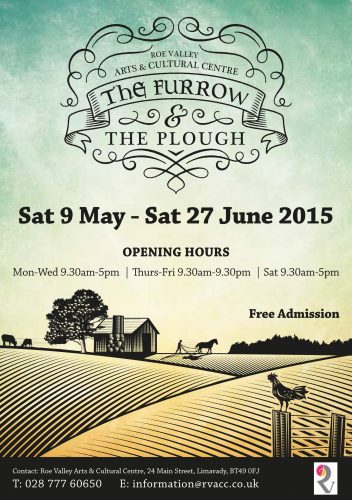 Limavady: The Furrow and the Plough

Preparing the land for sowing is a fundamental farming activity. Nowadays we tend to take this for granted,with huge tractors making ploughing look effortless.However until recently it was less so, with the earliest implement used in ploughing being a crude pointed bent stick used to stir the soil surface into small ridges which corn could be sown in. But man continually strived to become more efficient and those hand held hoes soon developed into simple ploughs.

These primitive ploughs were eventually pulled by oxen, camels and even elephants until the twelfth and thirteenth centuries when the horse widely replaced the oxen and the daily output of the ploughman doubled. Nowadays ploughing is fully mechanised and a tractor can plough as much as 30 times as a man with a horse.

THE PLOUGH
THE MOST WIDELY USED OF ALL FARM IMPLEMENTS

Key Parts of a Plough

The parts are all mounted on a backbone,or beam.

The Coulter- a knife which makes a vertical cut in the soil.

The Mouldboard or breast gently turns over the slice of soil cut by the coulter and share.

The depth of the furrow slice can be altered by adjusting the height of the wheels.

The plough is attached to the pulling animals at the head.

At the end of the furrow the ploughman lifts the share clear of the soil using the handles, which he also uses to guide the plough in the correct line.

A modern, tractor-drawn plough works on the same principle, but usually there are several sets of coulter, share and mouldboard and an automatic arrangement for lifting the plough at the end of the row.

THE BIRTH OF TRACTOR PLOUGHING

During the 19th Century the majority of equipment used on farms was developed. This equipment was primarily horse-drawn or hand-held and during the early 20th Century the horse was the main source of power with an estimated 1 million horses working on farms in 1913. When war commenced in 1914, the need for horses to go to the front meant that thousands of farming families had to say goodbye to their work horses and ponies, which were sent to endure a life on the front line. e loss of these horses on the farm meant that farmers had to adapt and find alternative sources of power.

Farmers began to use three-horse double furrow ploughs instead of a two-horse single furrow to increase the area of land they could plough a day. Advancements were then made in mechanical cultivation in which steam engines were used for ploughing. Farmers used an indirect method with a plough attached to a cable powered by the steam engine. It was not suitable to use a large steam engine for direct ploughing and cultivating as the machine was too heavy and could not work effectively in the fields. By 1917, almost half of steam-ploughing sets were lying idle due to the loss of farm workers to the war.

With the coming of the internal combustion engine a few British firms experimented with farm tractors, but the motor tractor was still in its infancy and it’s unlikely that there were more than a thousand in operation pre-war. It was not until numbers were imported during WWI that tractor ploughing as it is known today became popular. The majority of models used on farms were US models including the Titan later the Fordson. British models included the Ivel and the Sanderson tractor.

In Great Britain during World War I hundreds of thousands of male farm workers left the fields for the front line meaning those left behind were expected to produce the food for the nation. Reliance on no longer available imports and food shortageslooming after poor harvests in 1916 the Government turned to British farmers to feed Britain. A ploughing up Campaign was introduced to turn pastures over to arable production, something that had been neglected for more than 70 years. British farmers were faced with a seemingly impossible task. Feeding the nation with a shortage of horses, a lack of machinery and a short supply of men would be a remarkable achievement.

Replacing lost labour proved dicult so in 1917, the war oce released soldiers to help with the spring cultivation and harvest and the Women’s Land Army was formed to provide extra labour on the farm. By 1918, the area of land under arable production had increased by 2.5 million acres with nearly nine million acres of land planted with grain and potatoes – the largest harvest the country had ever seen.

In 1918, there were more than 223,000 women in agriculture with 8,000 working in the WLA performing the same tasks as men to continue producing food for Britain. By 1915 the Board of Agriculture developed a scheme for training women to do agricultural work in agricultural colleges across the country. This training focused on milking and ‘light’ farm work which 218 women signed up and 199 found work afterwards.

Ploughing matches have been a feature of the life of the countryside for a very long time. For just how long we do not really know, as essentially they were local affairs of the parishes, but it is believed that ploughmen matched their skill against one another over two hundred years ago.

The skill of a ploughman was not only measured in his ploughing but also in his horses and the design of his plough. Well trained horses knew how to pull a plough steadily and smoothly; they knew how to pull out and turn with e-ortless motion requiring little or no guidance from the ploughman and the minimum physical effort from him in positioning the plough for the next furrow.

The adoption of the motor tractor as the motive power in place of the horse-team was a rapid process. When the need came to put more land under the plough in the drive to grow more food, more ploughmen were needed to man the fast growing supply of tractors with their multifurrow ploughs. Many of these ploughmen were new to the job but quickly learned how to drive tractors and plough. Even experienced horse plough makers were experimenting with, and even guessing, the design for their new type mass produced tractor ploughs. The fact remains that good ploughing is still the most fundamental job on the farm.

Ploughing Championships are an ideal meeting place for anyone involved in the agricultural industry and their families to see top ploughmen show o their skills for the honour of being crowned a Northern Ireland Champion and representing their country on European and world stages. Visitors to ploughing Championships are able to enjoy the different styles of ploughing seen through many generations; from horse classes, vintage classes with the usual modern world style conventional and reversible classes.

There have been many famous names from across the province who have been successful in ploughing, the Barr’s, Wright’s and Gill’s to name a few. In fact, Northern Ireland is recognised across the world for producing 7 World Champions who won the Golden Plough (World Title) on 10 occasions which is second only to Austria in the all-time list. The first World Ploughing Contest took place at Cobourg, Ontario, Canada in 1953 and was first hosted in Northern Ireland in the village of Armoy in 1959. Limavady has been fortunate to have hosted the World Ploughing Championships three times in the years, 1979, 1991 and 2004. At each of these World Ploughing Championships the competitors brought a stone representing their country which was added to a cairn built by the host on whose farm the competition was held.

There have also been five members of the same family who have won the Northern Ireland Ploughing title on several occasions- W G Wright, Des Wright, Norman Wright, Don Wright and David Wright.