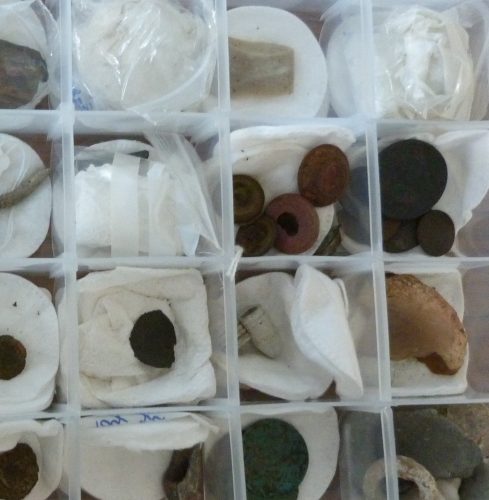 My Treasure, Our Story is a pilot project initiated by Coleraine Museum to allow community members with their own archaeological treasures to share the story of their finds. The project respects the private ownership of the objects within the law, but seeks to illustrate how each of these private treasures has something to say about our shared heritage.

Our contributors have agreed to share images and the stories behind their objects, and in return have received curatorial advice and information regarding the purpose and age of their objects. Each contributor has also been provided with the Northern Ireland Museums Council guidance on procedures reporting archaeological finds and treasure.

To view the existing objects in this project, click HERE.

Background
The Treasure Act 1996
The Treasure Act 1996 is an act of parliament which applies across England, Wales and Northern Ireland. The Act was designed to protect any item/s of ‘treasure’ found after 24th September 1997 and for its purposes defines treasure as anything over 300 years old and:
– containing at least 10% gold or silver or,
– any two or more other metal objects found together.

According to the Act, finds of possible treasure must be reported to the local coroner within 14 days. If the coroner finds that the object is classified as treasure it must be offered for sale to a museum at a price set by an independently board of exports. If the object is not purchased by a museum it may be retained by the land owner.
There are no legal restrictions regulating objects which are not covered by the Treasure Act. This includes individual bronze objects regardless of age, and stone tools.

Historic Monuments and Archaeological Objects (NI) Order 1995
Part III, article 42 of the Order states that any person who finds an archaeological object should report the object, the nature of its discovery and the name of the owner of the land it was found on, to the Department of Environment (now NIEA), the director of the Ulster Museum, or a police station within 14 days. Subject to the object not being covered by the Treasure Act 1996, none of these authorities have a duty to accept such objects into their care or to curate them. All non-treasure objects automatically belong to the land owner.

My Treasure, Our Story provides a platform to record some of the archaeological treasures discovered by individuals from the Causeway area that are not covered by the Treasure Act 1996.

To participate in this project, or if you would like more information, please contact
Coleraine Museum, cms@causewaycoastandglens.gov.uk

Links
For an introduction to the Treasure Act 1996 and how this applies in Northern Ireland, click HERE

For guidelines on the legal and ethical issues relating to metal detecting, click HERE.

To find out more about the Portable Antiquities Scheme in England and Wales, click HERE.