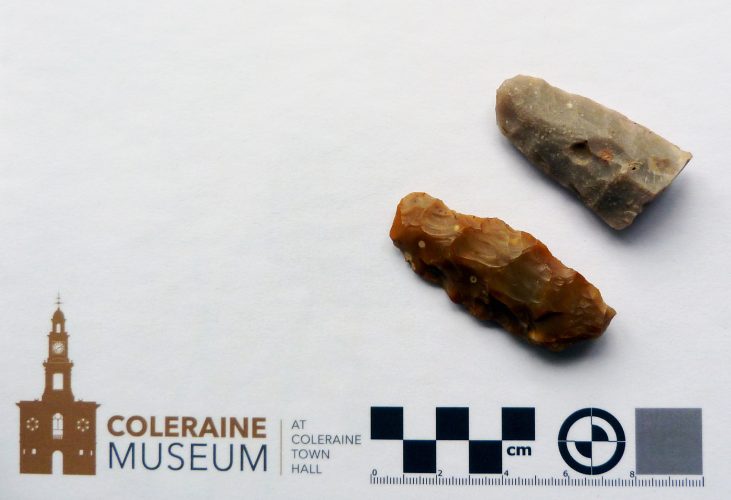 The owners of these objects used to live at Mountsandel, before the fields were built over in the 1970s. On wet days, when stone showed up against the surrounding dirt, the children of the family would walk over the ridges and furrows of the field, picking out pieces of flint from among the potato plants. The boys took the flint to a neighbour who had a keen interest in archaeology and who would explain what the pieces were and how they might have been used. They have been treasured objects in the family home ever since.

Although quite different colours, both of these objects were made from nodules of flint. Flakes were struck away from the central core to create these small, face trimmed core axe heads. The reddish-toffee coloured axe head is complete, while the light grey axe head has been broken towards one end.

These objects date to the early part of the Mesolithic, or Middle Stone Age, contemporary with the earliest known human settlement in Ireland at Mountsandel. Having been found in the fields so close to the site, there is good reason to suggest that they may have been made and used by the very same population who lived at Mountsandel nearly 10,000 years ago.

Face trimmed core axe heads such as these, with narrow, robust cutting edges, are thought to have been mounted on a stout handle and used for chopping wood or felling trees. Contemporary ‘flake axes’, with their finer and broader blades, may have then been used to shape or work wood into a finished product. Among the Mesolithic hunter-gatherers, wood working was an essential part of survival, allowing the construction of wood-framed huts, tools and weapons.