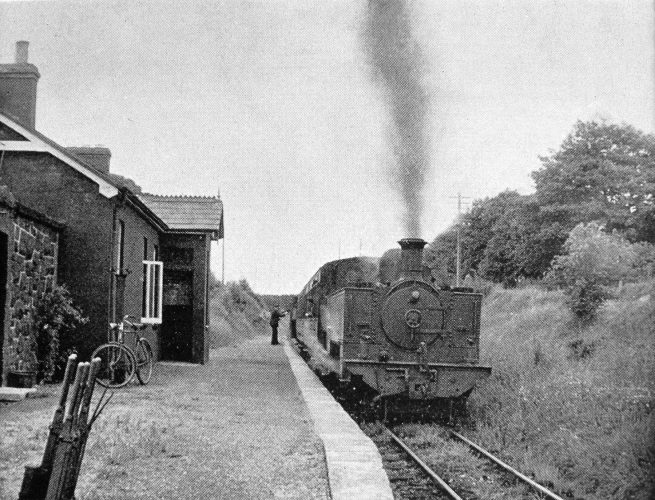 The McCartney Estate
The Lissanoure Estate, including Dervock village, was purchased by Lord George McCartney in 1741. He rebuilt most of the village, knocking down hovels and other basic structures and replacing them with better standard housing.

McCartney aimed to establish the village as the primary market town in North Antrim. Although the Dervock fairs were very successful and indeed were known by dealers from all over Ireland, Scotland and the north of England, Ballymoney succeeded in the race to become the major market town of the area.

The Dervock Fairs
Between 5 and 7 fairs were held very year, trading primarily in cattle and horses. The first, on 12th January lasted for three days. One on 23rd February was known as the last fair, a reminder of the time when the year began on the old calendar. There was one on 25th March, another on 14th May called the May fair, and the last on 22nd June, known as the Dervock Races. The fairs came to an end after World War Two

The market house was built Lord McCartney and opened on the 1st May 1805. It later served as a dispensary, a meeting house, a court house and then as one of the first Co-operative Societies in Ireland. Sadly it to fell into decline and was rescued by the Dervock and District Community Association to be completely rebuilt and launched as the flagship of a forward looking village and confident community in the year 2002.

Industry
According to a survey complied by James Boyle in 1834 Dervock included the following trades and occupations.

There was one tannery, three corn mills, three flax mills, one brick field, and at one time a brewery, ten pubs and various shebeens. It must have been a wonderful place.

The Narrow Gauge Railway
The narrow gauge railway wound its way through the village on its way from Ballymoney to Ballycastle. This beautiful little railway opened on the 17th October 1880 and was closed on the 3rd July 1950 – what an asset that would be if only we had it now. The first three engines bought for the line were called Dalriada, Countess of Antrim and Lady Boyd.

War Memorial Institute
Dervock’s War Memorial Institute opened in 1922 and was probably the first in Ireland. The site was donated by Capt. C.G. McCartney and it cost £2000 to build. It comprised a main hall with seating for 400 people, a large reading room, a recreation room and a kitchen. Sadly just a simple stone monument now commemorates the local men that died and served during the two World Wars, erected by the reformed Royal British Legion.

The Orange Order
There were two Orange lodges and one Masonic lodge that sat in the village. The marching bands included lambeg drums, flute bands, a mouth organ band and a pipe band. So many musicians in Northern Ireland have been trained in this way that surely we must possess the greatest number of musicians per head of population of anywhere in the world.

Places of Worship
The main churches of the area straddle nearly all the roads in and out of the village causing some of the old people to remark that it was either to keep the devil out or God in.

There has been a church at Derrykeighan since about 460AD. The congregation there moved to the current Church of Ireland in Dervock, which was built about 1831. A Presbyterian Kirk was noted here around 1646 and the Covenanting Church, known as the old mountain church, dates to about 1783.  The Roman Catholic Church was built as late as 1846, since prior to then the Penal Laws prevented Catholics from celebrating mass or holding religious meetings.