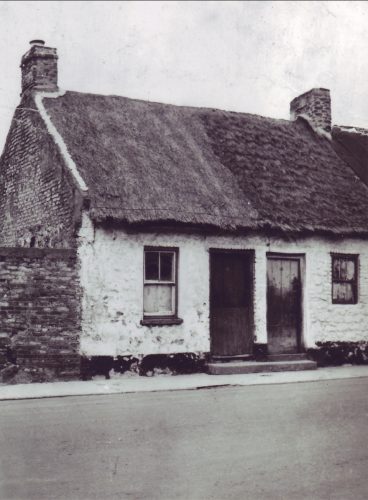 Church of Our Lady & St. Patrick
The Chapel was dedicated on 2nd June 1878 and is one of the finest in Northern Ireland. The £8,870 construction cost was raised through public subscription over a period of nearly 20 years. The main altar was a gift from the Royal Irish Constabulary. The stained glass windows in the apse were created by the renowned Franz Mayer Studio in Germany.

This building replaced an earlier chapel and clergyman’s residence built in 1833. The Ordnance Survey Memoirs of 1835 also mention an even older church still standing in the centre of Castle Street, which was built in 1794 and is described as ‘a very small brick house with a thatched roof … not distinguished by any of the marks by which those places of worship are generally known’. It was planned to convert this building into a schoolhouse.

The Jordan Family
The Chapel was built by James Jordan, a building contractor who lived at 18 Castle Street, now MaxSnax. Unfortunately, he underpriced the job, effectively putting him out of business in 1878.

Kirgan Monument
When Christopher Kirgan died in 1931, aged 103, he was one of Ireland’s oldest men. He was born in 1927 at Unshinagh, near Dunloy and worked as a commercial traveller for William Bell & Co. of Belfast for 50 years, becoming a prominent citizen of the city.  He started planning a monument for his burial at the Church of Our Lady and St. Patrick’s in 1911, 20 years before he died, and often came by train from Belfast to admire it. The finished monument is described by the Ulster Architectural Heritage Society as a ‘gothic mausoleum of delightfully vulgar pretentions’.

George Shiels
One of the most popular Irish playwrights of the 20th century, George Shiels died on 19th September 1949 and was buried in the family plot at the Church of Our Lady and St. Patrick’s. Shiels emigrated to America in 1903, but, after suffering a disabling accident in Canada, he returned to Ballymoney and began writing short stories and then plays. His work often drew on his observations of the colourful lives of his Ballymoney neighbours.