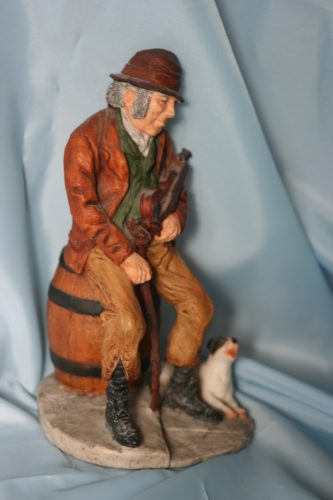 The most renowned resident of Limavady Workhouse was Blind Jimmy McCurry, also known as ‘The Blind Fiddler from Myroe’.

Born in 1830, Jimmy often played his fiddle outside the Burns and Laird Shipping Offices in Limavady on market days. It is said that one day in 1851, Jane Ross, who lived opposite the Shipping Offices heard Jimmy playing. Taken by the haunting melody, Jane asked him to play it over and over until she had written down every note. This tune is recognised the world over as The Londonderry Air.

Sadly, Jimmy’s health deteriorated and he spent his last days at Limavady Workhouse. He was buried in an unmarked grave at Tamlaghtfinlagan Parish Church, Ballykelly.

In 1910 an English lawyer by the name of Fred Weatherly put words to the tune that Jimmy McCurry had played for Jane Ross. The song was called Danny Boy.

Jimmy received one florin for his tune.
The Pauper’s Graveyard
A long thin plot of land adjacent to the workhouse served as its third graveyard between 1841 and 1931. It was placed as far as possible from the main workhouse buildings for fear of cholera and other infectious diseases spreading to the other inmates. Many of those buried in this plot were victims of the Famine.
LCDI have erected a memorial plaque in the centre of the graveyard and each year holds a memorial service for those who died in the workhouse and were buried here.