Background to the project 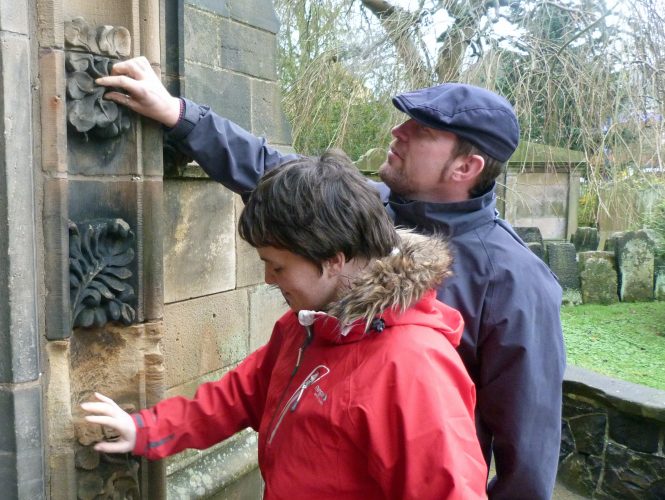 09/07/14
The launch of the RNIB exhibition, A Sense of the Past, at the Roe Valley Arts and Cultural Centre will take place on the 1st of August. The exhibition will run at the RVACC until the 25th September. We hope to be able to bring our own group members to see the exhibition as a starting point for our programme.

05/08/14
The A Sense of the Past launch at the RVACC went very well last Friday. The exhibition was launched by the mayor of Limavady; the event was attended by members of the visually impaired community from counties Londonderry and Antrim and accompanied by live traditional music. The exhibition will remain at the RVACC until the 25th September.

20/08/14
The Sensing the Past: Irish History Starts Here programme will be launching in the second week of September. We currently have two stakeholder groups who will be meeting monthly. The first sessions will take place on Tuesday the 26th of August and Thursday the 11th of September at the RVACC in Limavady.

30/09/2014
Sensing the Past: Irish History Starts Here began this month with group visits to the RNIB traveling exhibition, A Sense of the Past, at the RVACC in Limavady. Our next group sessions will be in the second week of October when we start exploring our fascinating local history by handling some prehistoric objects; and in November when we have a practical prehistoric pottery workshop.

10/10/14
This week we held two handling sessions for members of the Sensing the Past stakeholder groups. Taking our members back almost 10,000 years, we discussed the arrival of the first people to the Coleraine area and engaged directly with objects made and used by prehistoric man. Highlights included passing around original Stone Age  axes, Bronze Age pottery and (modern) animal skins. Next month all the stakeholders will come together in Portstewart for a pottery workshop as we attempt to make new pots by the ancient methods.

18/11/14
This month saw the Sensing the Past stakeholders at Flowerfield Art Centre in Portstewart where they took part in a special workshop led by Adam Frew, Flowerfield’s own potter in residence. Adam showed the group some prehistoric methods for creating ceramic bowls and then allowed each member’s creative streak to be unleashed. Everyone had a great time and made two or more vessels in the process. The pottery will be fired by Adam and returned to the group when we next meet. The December sessions will be held in the historic St Patrick’s Church, Coleraine, for an object handling session exploring historic Coleraine, from St Patrick to Plantation.

11/12/14
In December the Sensing the Past programme held two ‘historic’ object handling sessions at St Patrick’s Church, Coleraine. The present church was built between 1883 and 1885 but we took the story of the church and the town back to St Patrick’s visit in the fifth century. The groups handled objects from Coleraine and Portrush dating from the medieval period through to the time of the Londonderry Plantation while we explored the impact of different forms of Christianity on the modern town. In January we will be looking at the maritime history of the North Coast with Ronan McConnell from Derry City Council’s Visitor and Museum Services.

22/01/15
The Sensing the Past programme started the new year with a special handling session held at the Coleraine Borough Council Offices, Cloonavin. In collaboration with staff and objects from Derry Visitor and Museum Services, we explored the maritime history of Ireland’s north coast from the first people to World War II – our thanks to Ronan McConnell for a great day. Next month the stakeholders will be getting together for a workshop with award winning artisan basket-weaver Louise McLean to hear about the ancient art of basketry and try their own hands at making traditional designs.

12/02/15
This month the Sensing the Past stakeholders returned to Flowerfield Art Centre in Portstewart to try their hands at basketry. Guided by specialist Louise McLean, each member of the group produced a woven willow sciathog – a traditional basket used, among other things, to strain and serve potatoes. In March we will reconvene for a special session with the Mayor of Coleraine where we will explore the musical traditions of Ireland’s north coast.

13/03/15
In March we were hosted in comfort by the mayor of Coleraine, Cllr George Duddy. Received in the Mayor’s Parlour, we were also lucky enough to be entertained by Lucy Miller, a talented young Harper from Garvagh Harp School. Previous meetings of the Sensing the Past group have focused on tactile approaches to engaging with our past; we have handled ancient objects and tried our hands at making our own. This month we ran a slightly different type of session – the meeting explored the social history of blind musicians from the Causeway Coast and Glens area such as Rory Dall O’Cahan, Denis O’Hampsey and John McNicholl. One of our group members, Julie Graham, was gracious (and talented) enough to play the tin whistle for us, musically illustrating key songs to accompany the events from our story.

20/04/15
This month saw the last of our series of sessions for the Sensing the Past programme. Using historical foods (of varying culinary merit), we retraced our footsteps through the various periods we have explored over the course of the programme. From Mesolithic hazelnuts and Bronze Age hearth cakes, through to Plantation pottage and desserts flavoured with 17th century spices, we got a taste of the past and discussed the various foods available in each period. Our next event will be the launch of the Sense of the Past: Irish History Starts Here exhibition, which opens on 1st May and will be up until 30th June.

01/05/15
The Sensing the Past: Irish History Starts Here, and the A Sense of the Past exhibitions are now officially open in Coleraine Town Hall until 30th June.
Tuesdays – Saturdays, 11am-4pm.

06/05/15
Deputy Mayor, Cllr Darryl Wilson, officially opened RNIB’s A Sense of the Past exhibition and Coleraine Museum’s Sensing the Past: Irish History Starts Here exhibition in Coleraine Town Hall yesterday. We would like to thank all those who were able to join us for the joint launch. We had a great day and hope you all enjoyed the exhibitions.

Both exhibitions will remain in the Town Hall until 30th June, Tuesdays – Saturdays, 11am – 4pm, and admission is FREE!