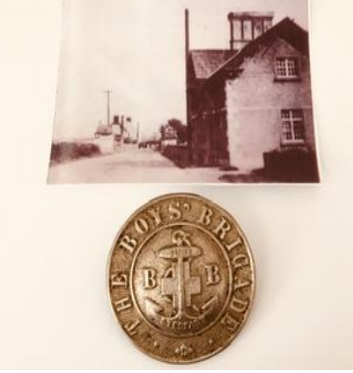 Frank Dale had fond memories of his grandfather John, who served in the Grenadier Guards in the 1870s and purchased Bridge House, Toome, in 1880. A young Frank, fascinated by the mobilisation at RAF Creagh, would join the Boys Brigade during World War Two.

Between 2013 and 2015, TIDAL Toome participated in an oral history project with the Doagh Ancestry Group and Whitehead Community Centre called the Three Villages Living Memories Project, which aimed to build better links and understanding between people from different generations in each community and to investigate similarities and differences in experience. Oral History interviews were conducted with stakeholders by volunteers in each community and were co-ordinated by Dr. William Roulston of the Ulster Historical Foundation.

One of the interviewees, Frank Dale, donated his Boys Brigade Badge and several photographs to TIDAL Toome before his death in 2017. His interview is an insight into the industry of Toome and the impact of the Second World War on an impressionable youth.

Frank Dale spent a good deal of his childhood with his grandfather, John Dale. John was from the townland of Tullylinkisay, Castledawson, and served in the Grenadier Guards in the 1870s. In 1880, he moved to Bridge House with his wife Annie Arrell, who was from Ballydermot, near Bellaghy. John made his way into local industry by becoming a key link in the haulage trade for local farmers. Frank recalled,

John expanded his enterprise by purchasing a farm in Ballydougan, Cargin in 1916. His brother, Edward Dale, was a schools Inspector who Frank remembered as,

“the jewel in our family crown, for he went far, wangling his way into Trinity without going to the local Grammar, the Rainey in Magherafelt…he was a fluent Gaelic speaker and we loved to see him coming to visit.”

Frank’s interview dwelled on the uncertainties and hardships of growing up in a farming family. Hay was the main fodder crop for livestock, and he remembered that haymaking was an anxious time of year for farmers due to the unpredictability of the weather,

“Haymaking was six weeks heavy, steady work. The worry of saving your hay long ago during my childhood shortened people’s lives, because you could lose your hay, and if you lost your hay, where were you? People don’t understand the pressure the farmers were under…the pressure was intense.”

Horses continued to pull carts and farm machinery through the 1930s and 40s, and Frank’s father James Dale was the President of the Toome Horse Ploughing Society before the Second World War. Horses were integral in hay-making and harvesting, pulling binders to harvest oats and the ‘tumbling paddy’ to turn the hay. Young Frank was intimidated by the family horse,

“I did not like horses. I wasn’t fit to work with them and they made a fool of me – I was too young. Horses are clever. They ruled me, I didn’t rule them…Besides, they were dangerous. I know of three people who were killed with horses in the area, for they were unpredictable.”

Frank stated that the opening of the RAF Creagh airfield and the arrival of the USAAF (United States Army Air Force) in 1943 was the defining moment of his childhood. It occurred,

“just as I was starting to look around me…the sky was full of aeroplanes, and I used to go down to the aerodrome and see them taking off and landing – this was magic. I didn’t realise a lot of those young boys would never come back.”

Between July 1943 and October 1944, Toome was one of 12 aerodromes built and occupied by the USAAF training crews. The airbase consisted of three runways, two T2 hangars and incorporated miles of surrounding farmyard and dwellings to act as accommodation for the air personnel. Caught up in the fever of wartime and ‘being fed tales of war and soldier’s songs for tea’, Frank joined his local branch of the Boys Brigade for the duration.